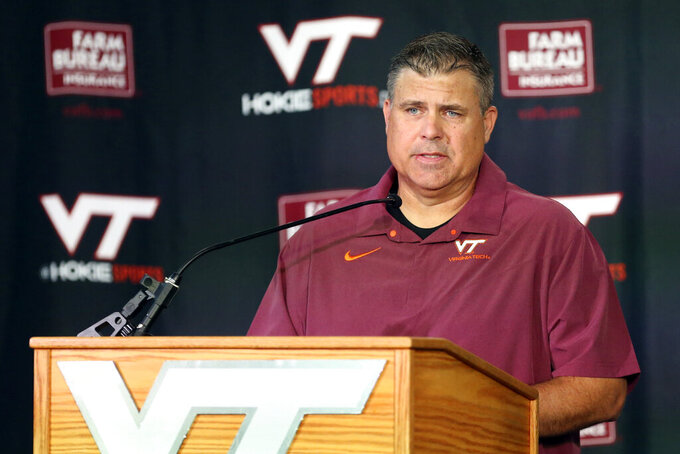 Line: Virginia Tech by 7 1/2, according to FanDuel Sportsbook.

The Hokies begin the Brent Pry era in a stadium where they lost 49-35 while ranked 13th in 2018. Pry's bid at making an impression on the Hokies faithful comes against an Old Dominion team coached by Ricky Rahne, a longtime colleague at Vanderbilt and Penn State who is in his third season.

Pry and Rahne worked with each other. How their teams prepare for that familiarity will be critical.

Virginia Tech: QB Grant Wells. The Marshall transfer threw for 34 touchdowns with 22 interceptions in two years (23 games) as a starter. He also ran for nine touchdowns and the coaches seem to like his long-game passing ability.

Old Dominion: QB Hayden Wolff won five straight games after taking over as the starter at midseason last year, leading to Monarchs to a bowl berth after a 1-5 start. He won a tight battle over Central Florida transfer D.J. Mack and Notre Dame transfer Brandon Clark to retain the starting job.

Wolff threw for 10 TDs and seven interceptions last year. ... Apart from the upset, the Monarchs have lost 31-17 and 38-0 to the Hokies, both in Lane Stadium. ... The Monarchs last year became just the third team — Miami, Ohio (2016) and North Texas (2021) — to start 1-6 and qualify for a bowl game. ... Old Dominion is 1-12 in its history against the Power Five since restarting football in 2009, with the only win over the Hokies. ... Monarchs DE Marcus Haynes, one of five players back from the 12018 game, sacked Ryan Willis on the final play to punctuate the victory. ... The Hokies are opening on the road against a state rival for the first time since they won 20-9 at Richmond in 1982. ... Pry, former defensive coordinator at Penn State and a Hokies defensive assistant from 1995-97, is bringing back the lunch pail that represents the team's all-in approach to playing defense.