Jim Harbaugh happy to be coaching Michigan for 7th season 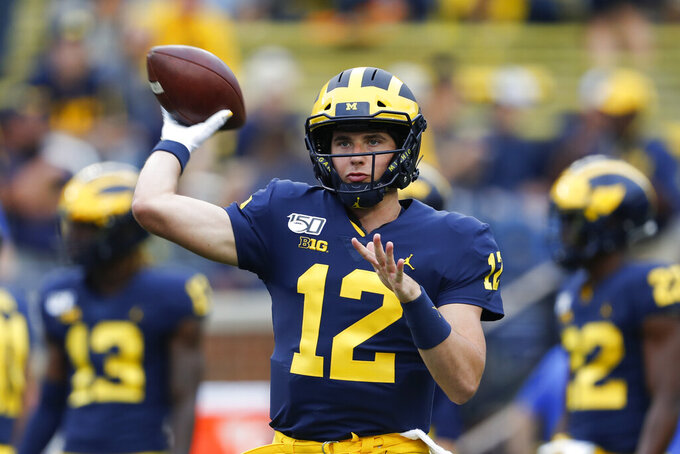 FILE - In this Aug. 31, 2019, file photo, Michigan quarterback Cade McNamara throws during warmups before an NCAA college football game against Middle Tennessee in Ann Arbor, Mich. McNamara is expected to start at quarterback this season for the Wolverines. (AP Photo/Paul Sancya, File)

ANN ARBOR, Mich. (AP) — Jim Harbaugh is thrilled and perhaps relieved to still be coaching at Michigan for a seventh season, a year after winning two games and signing a new contract that gives the school an out if it wants to replace him.

“Personally, a lot of gratitude," he said. “How am I feeling? Attacking. Attacking each day with tremendous enthusiasm."

The former quarterback, drafted by Chicago in the first round in 1987 out of Michigan, hung up his helmet after the 2000 season with the San Diego Chargers after also playing in Indianapolis. As a head coach, Harbaugh turned around the University of San Diego, Stanford and San Francisco 49ers.

Hopes were high he could do it again, but enthusiasm at least outside the program has waned because Harbaugh is winless against rival Ohio State and is 0-11 in games the Wolverines were not favored to win.

Questions swirled about what athletic director and former teammate Warde Manuel would do last winter — right up until Harbaugh was handed a five-year deal that cuts guaranteed compensation and gives him a chance to make up for the financial loss if he can start winning championships.

Michigan can buy out Harbaugh’s contract for $4 million if it decides to fire him without cause after the 2021 season and the amount is reduced by $1 million in each of the following three years.

“I don’t think he gets the credit he deserves," said defensive backs coach Steve Clinkscale, who was hired away from Kentucky in May. “So, we’re going to go out there and prove people wrong."

Cade McNamara is expected to start the season as the No. 1 quarterback after playing in four games with one start last year as a redshirt freshman.

“His confidence is always something he carries on his sleeve," receiver Ronnie Bell said.

J.J. McCarthy, a highly touted freshman, is pushing for playing time and to potentially replace McNamara if he does not make the most of the opportunity.

“Of all the years, the quarterback play right at the beginning has been really sharp," Harbaugh said.

Harbaugh made many changes on his staff. The biggest one was hiring 33-year-old defensive coordinator Mike Macdonald to replace Don Brown. Macdonald spent the past seven seasons with Harbaugh’s brother, John, and the Baltimore Ravens.

Fifth-year senior safety Brad Hawkins said opponents will be forced to guess what they will see from the new-look defense.

“You can’t show the same things and the same pressures," Hawkins said. “You have to disguise, rotate and give different looks. That’s what we’ve been working on in camp.”

Michigan was 2-4 last season in part because a lot of inexperienced offensive linemen were forced into significant roles.

“It was crazy year, but it was good in one sense," said Andrew Stueber, one of five offensive lineman returning with starting experience. “It got a lot of people playing that otherwise would not have gotten any playing time."

The Wolverines have eight starters back on defense led by defensive end Aidan Hutchinson, linebacker Josh Ross and Hawkins.

“It's very important for all of us to lead these guys in the right direction," Hawkins said. “We've been here and we've seen a lot."

Michigan, which went 0-3 at home during the pandemic-shortened season, opens Sept. 4 against Western Michigan at the Big House. The Wolverines will host No. 20 Washington on Sept. 11 under the lights and No. 17 Indiana on Nov. 6.

The schedule also has home games against No. 12 Wisconsin (Oct. 2), No. 19 Penn State (Nov. 13) and the fourth-ranked Buckeyes on Nov. 27, when Harbaugh gets a chance to end his 0-6 drought as coach in the programs' greatest rivalry.