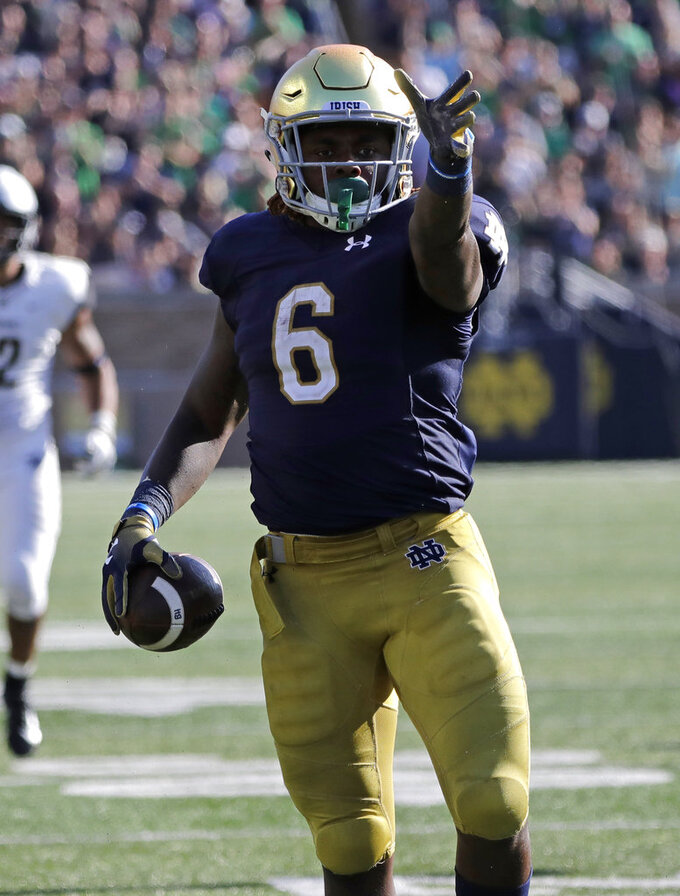 The junior shed more than 10 pounds from his 5-foot-11 frame over the summer after playing at 230 pounds during an injury-plagued 2017 season. He eliminated some snacks and unhealthy foods, took up yoga and dropped a second of his 40-yard dash time so he could share rushing duties with sophomore Jafar Armstrong and others during the preseason.

Last Saturday, Jones made his first career start and carried 17 times for a career-high 118 yards — his first collegiate effort over 100 yards — and led the eight-ranked Fighting Irish (3-0) with 56 more yards on two receptions in a 22-17 victory over Vanderbilt.

"I feel like I'm in high school again, getting a lot of carries, just reppin' and all that," said Jones, who had 232 rushing yards last season, including a career-high 59 yards in a 48-37 victory over Wake Forest, this weekend's opponent. "I'm a rhythm back — I need five carries to get going."

Jones' first five carries against the Commodores went for 55 yards, including a 19-yard run to start the game and two 14-yard efforts. That production followed a 61-yard, two-touchdown performance in Notre Dame's 24-16 victory over Ball State that left an impression on the coaching staff.

"(Jones) started to run with a demeanor and mindset that he wasn't going to be tackled," coach Brian Kelly said. "He carried that into practice. If he runs physical (and) catches the ball coming out of the backfield, he's going to be a big asset and he'll continue to be a big asset for us."

Jones, who leads the Irish with 224 yards and an average rush of 5.7 yards, doesn't mind that he's sharing carries with Armstrong, a 6-foot-1, 218-pound converted wide receiver who started the first two games, and of course with quarterback Brandon Wimbush. Against Vandy, Wimbush picked up 84 yards on 19 carries, while Armstrong had 46 yards on 11 carries as the Irish rushed for a season-high 245 yards.

Last season with All-Americans Quenton Nelson and Mike McGlinchey helping lead the way for running back Josh Adams, the Irish averaged 269.3 rushing yards (seventh nationally) and 6.3 per carry. This season with three linemen in new spots and Adams now with the Philadelphia Eagles, Notre Dame is averaging just 164.7 yards (76th) and 3.6 per carry.

"We're still trying to get the kinks out; to be honest, I think we'll find it real soon," said Jones, who expects the Irish to be "very balanced and very lethal."

Kelly is OK with the running back by committee.

"I think we're going to continue down that road where all three of those guys are going to have multiple carries," Kelly said. "We're only scratching the surface in terms of where we can be."

Senior running back Dexter Williams, who averaged 9.2 yards per carry in 2017 as a backup, could also give the running game a boost.

"We have so many different types of backs and that's hard to defend against," Wimbush said. "All these guys can catch out of the backfield as you saw. I'm excited for the guys we have and I'm looking forward, obviously, to Dexter's return."

The 5-foot-11, 215-pound Williams, who has been working out with the team since the preseason but has not played because of a suspension, has breakaway speed. He is expected back when Stanford visits Sept. 29.

"You feel like you've got players that can make plays for you," Kelly said.