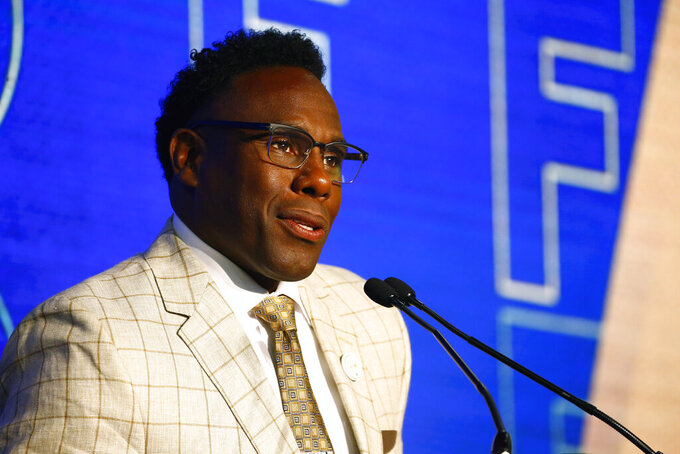 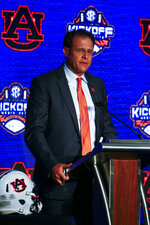 HOOVER, Ala. (AP) — The Latest on Southeastern Conference media days (all times local):

Auburn's Gus Malzahn makes it clear that his top early priority for preseason camp is picking a starting quarterback.

He says he expects "a fierce battle" between redshirt freshman Joey Gatewood and five-star recruit Bo Nix. Both players are threats to run the ball, and Malzahn has had his biggest success at Auburn with dual threat quarterbacks like Cam Newton and Nick Marshall.

The coach took over play calling duties again starting with the Music City Bowl against Purdue. He got off to a good start with a 63-14 win.

Gatewood's only action last season came in the bowl game when he attempted only one pass but gained 28 yards on three runs. Nix was rated the nation's top dual threat quarterback prospect by the 247Sports composite rankings of the major recruiting sites.

One of the perks of finally ending Kentucky's 31-game losing streak against Florida last year is that coach Mark Stoops didn't have to answer any more questions about it on Thursday at SEC media days.

At least Stoops thought he was done with it.

The coach drew some laughs after he groaned and said, "Oh, come on now," when asked if the Wildcats were ready to start a winning streak against Florida.

Kentucky won 10 games last year for the first time in 41 years, but must replace several stars from that team, including running back Benny Snell and linebacker Josh Allen. The Wildcats are part of increasingly competitive Eastern Division. Georgia and Florida are expected to finish near the top but just about everyone in the division has high expectations.

Stoops says "it's no surprise that the East is improving. But we all know so is the West. So you're just trying to constantly do your part. I can't be affected what's going on with the rest of the league, you know. We've really got to focus on Kentucky."

Derek Mason is striking an optimistic note about his sixth season at Vanderbilt, like most coaches this time of year.

Flush with an offseason contract extension, he's still seeking his first winning record with the Commodores despite flirting with one a couple of times. Mason said Thursday this is his deepest team at Vandy.

Mason promises that "this is a different-looking Vanderbilt football team." He says the team has more depth, maturity, athleticism and leadership.

He also feels good about his quarterback position. Graduate transfer Riley Neal, who started 32 games at Ball State, and Deuce Wallace are vying for the starting job. Mason also announced the addition of four more grad transfers in June.

The Southeastern Conference is experiencing a rare moment of football stability: There are no new head coaches in the league for the first time since 2006.

Auburn's Gus Malzahn and Vanderbilt's Derek Mason are among those under a significant amount of pressure to show improvement after lackluster seasons last fall. Malzahn, Mason and Kentucky's Mark Stoops will all take the podium during the final day of SEC media days on Thursday.

Malzahn's in his seventh year at Auburn and comes back after an 8-5 season that included a 3-5 mark in the SEC. The Tigers will have a new quarterback after the departure of Jarrett Stidham.

Mason's in his sixth year with the Commodores and hasn't had a winning season, though he's finished 6-7 twice, including last year.