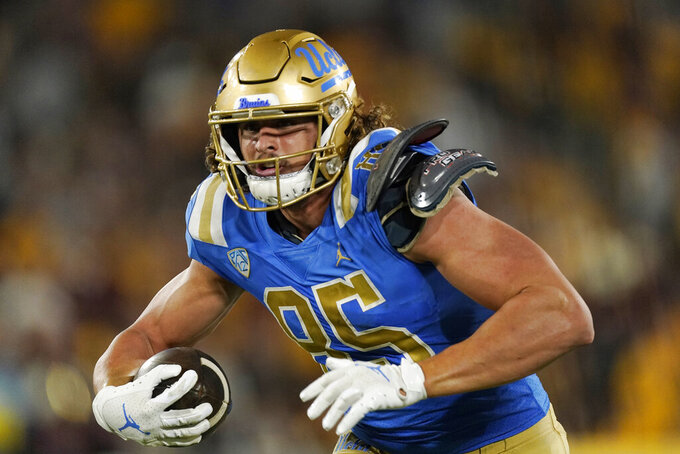 Line: NC State by 2, according to FanDuel SportsBook.

NC State is trying to finish with double digit wins for just the second time in school history. The Wolfpack’s best finish was 11-3 in 2002 behind junior quarterback Philip Rivers, who went on to star for the San Diego/Los Angeles Chargers for 16 years before finishing his career with Indianapolis. UCLA is looking for its first bowl win since beating Kansas State 40-35 in the 2014 Alamo Bowl.

NC State record-setting QB Devin Leary against UCLA’s defense. Leary threw four TD passes in the regular season finale against North Carolina to give him 35, breaking the school single-season record of 34 by Rivers in 2003. Leary has distributed those 35 TD passes to nine different players, and has completed passes to 17 players overall, 18 if counting the tipped pass OG Derrick Eason caught against Louisville.

UCLA: QB Dorian Thompson-Robinson became the sixth Bruins player to achieve 3,000 yards of total offense in a season. He has 2,409 yards passing and 21 touchdowns, and 609 yards rushing with seven touchdowns. Thompson-Robinson threw for 349 yards and had his hand in six touchdowns in a 62-33 rout over rival Southern Cal on Nov. 20, including hurdling a Trojan defender to score. He’s thrown for 780 yards and six TDs in his last three games, while rushing for 246 yards and three scores.

NC State: All-American LT Ikem Ekwonu is considered by many to be the best offensive lineman in the country. He was a finalist for the Outland Trophy and was named first team All-ACC. He has 154 pancake blocks in his three-year career, plus 47 knockdowns.

The Holiday Bowl will be played at Petco Park, the downtown home of baseball’s Padres, with a capacity of 41,000. The game needed a new home after the site of the first 42 games, 70,000-seat SDCCU Stadium, was torn down to make room for San Diego State’s new stadium. The Holiday Bowl has a five-year deal to play at Petco Park. .. The honorary Holiday Bowl chairman is Padres right-hander Joe Musgrove, who grew up in suburban El Cajon and threw the first no-hitter in franchise history on April 9 at Texas in just his second start with his hometown team. ... This is the first in a new five-year contract between the Pac-12 and ACC. That contract was to have started last year but the bowl was canceled due to COVID-19. ... The teams haven’t met since UCLA beat NC State at the Los Angeles Memorial Coliseum in 1959 and 1960. Those games featured two future NFL starting quarterbacks and College Football Hall of Famers in NC State’s Roman Gabriel and UCLA’s Billy Kilmer. Gabriel was drafted by the Los Angeles Rams in 1962 and was voted the NFL’s MVP in 1969. ... UCLA has won three straight games while NC State has won four of its last five.