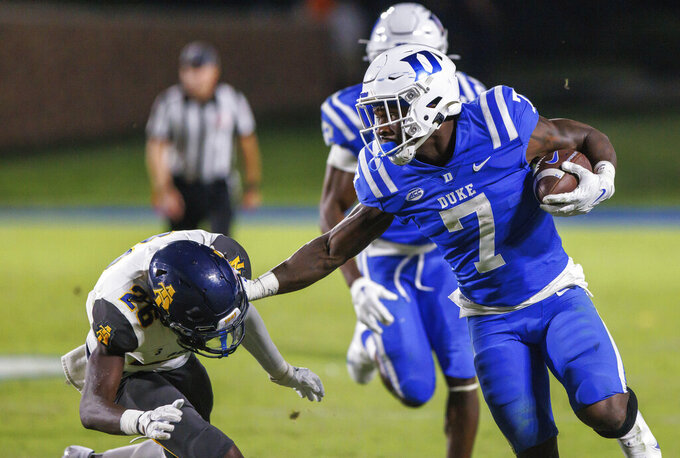 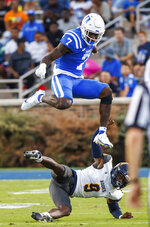 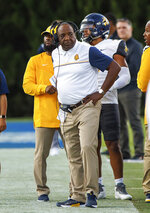 “We don’t want to overstate it,” first-year Duke coach Mike Elko said. “It’s a fun ride and we just want to continue to do it.” That said, the Blue Devils don’t want to act surprised about their early success.

“That’s exactly what we thought,” Leonard said of the 3-0 record. “It’s completely expected.”

Leonard ended up 11-for-12 passing for 155 yards – all in the first half – to go with a team-high 66 yards rushing on five carries. “Being a dual-threat quarterback is something I pride myself on,” Leonard said.

Leonard completed his first 11 passes before he was intercepted by Avarion Cole on his final throw late in the first half.

“We did improve,” N.C. A&T coach Sam Washington said. “We did do some things better in the second half than we did in the first half. … They are getting the message. I can see some growth.”

Duke scored three touchdowns in the first 8 ½ minutes, beginning with the first play from scrimmage when Leonard connected with Nicky Dalmolin for a 38-yard play.

The Blue Devils used 10 plays on their second possession, ending with Jordan Moore making a diving catch for a 4-yard touchdown. Duke’s defense produced the next points when 298-pound tackle DeWayne Carter grabbed a fumble and ran 35 yards untouched for the score.

“Most exciting play of the game if you ask me,” Duke defensive back Brandon Johnson said.

In the second half, Leonard ran 56 yards for the first points. Jaylen Coleman (12 yards) and Eric Weatherly (14 yards) also scored on runs for the Blue Devils.

The teams have met three times in a four-season span, with Duke winning convincingly each time.

The Aggies, who’re playing their final football season in the Football Championship Subdivision’s Big South Conference, couldn’t afford those mistakes. N.C. A&T lost fumbles on its first possessions of each half.

“You can not give opposing teams those kind of opportunities,” Washington said. “It’s one of those things that’s just a thorn in our side.”

N.C. A&T: The Aggies have lost twice this season to teams from Durham after an opening-night loss to long-time rival North Carolina Central in Charlotte. They’ve been wiped out in their past two games, so they’ll look forward to playing their first 2022 home game next week.

Duke: The Blue Devils took care of business in impressive fashion, matching last season’s win total in the process. It turned out to be a chance to see numerous reserves in action in the fourth quarter.

Duke: Plays at Kansas on Saturday.