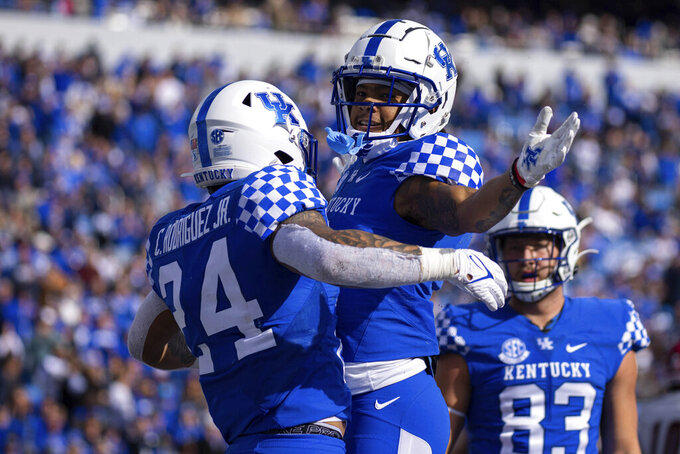 LEXINGTON, Ky (AP) — Will Levis’ final home game this season was much like his September debut: lots of yardage and explosive plays that more than offset his miscues.

Levis overcame an early fumble and an interception to throw for four touchdowns and a career-high 419 yards as Kentucky cruised past New Mexico State 56-16 in Saturday’s home finale.

“That’s the first time in my college career (throwing for more than 400 yards), which is cool,” Levis said. “But we still have a lot of things to clean up, and it could have and should have been more.”

The Wildcats (8-3) earned their 14th consecutive nonconference victory behind Levis, who completed 21 of 31 passes to become the first Kentucky quarterback to surpass 400 yards since Andre Woodson against Tennessee in 2007. Things didn’t start so well for the junior QB, who couldn’t corral a high snap on the first series and fumbled, which Trevor Brohard ultimately returned 25 yards to give the Aggies a 7-0 lead.

Kentucky outscored NMSU 56-9 from there, including Quandre Mosley’s 38-yard interception return to make it 14-7. Levis threw touchdown passes of 32 and 2 yards to Justin Riggs and 9 and 62 yards to Josh Ali.

Wan’Dale Robinson had eight receptions for a career-high 181 yards and became Kentucky’s first 1,000-yard receiver under coach Mark Stoops. Chris Rodriguez Jr. overcame a fumble — one of three by the Wildcats — inside the Aggies’ 5 to rush for 119 yards on 16 carries with a touchdown as the Wildcats rolled up a season-high 707 yards.

The Aggies (1-10) did move the ball effectively at times, but settled for three Ethan Albertson field goals before halftime. New Mexico State managed just 282 yards with just 101 on the ground.

“Today was the same effort that we’ve seen all season,” Aggies coach Doug Martin said “Our players are fighting as hard as they can and giving great effort. They’re a great group of kids and have great spirit about them. We’re just not quite talented enough yet coming off last season.”

Though Kentucky controlled the game offensively and led 35-16 at the half, Stoops challenged his team to put the game away.

Kentucky shut out the Aggies in the second half with reserves getting in the game including quarterback Beau Allen, who scored on a 3-yard run.

All told, Kentucky had four turnovers in addition to Levis’ interception. Stoops said putting the ball on the ground was a concern that can’t happen next week at rival Louisville.

Of Rodriguez, Stoops said, “That’s unacceptable because he is a better player than that. Chris has been practicing really well. There’s no excuse for fumbles. But I know he will get it corrected.”

Kentucky: Wildcats seniors contributed several big plays on what was likely their final home game. In addition to Riggs’ two scoring catches, Ali had seven catches for 164 yards. Josh Paschal had six tackles, including a sack and 1.5 tackles for loss. Rodriguez posted his seventh 100-yard rushing game this season and 13th of his career.