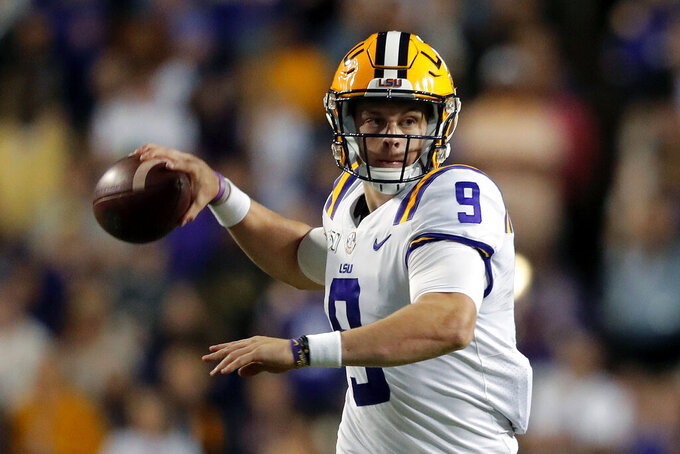 BATON ROUGE, La. (AP) — No. 1 Alabama and No. 2 LSU are in the process of turning long-held perceptions of the Southeastern Conference upside down.

They are the highest-scoring teams in the nation at the midway point of this college football season. That should shatter any lingering notions that the SEC features stifling defense and ball-control offenses heavy on smash-mouth runs.

"If you tell a guy to go huddle, you'd have to explain what a huddle is nowadays," LSU coach Ed Orgeron joked this week while discussing a transformation in his offense, which has produced a nation's best 52.5 points per game this season for the unbeaten Tigers (6-0).

These are the same two teams that famously played to a 9-6 struggle won by LSU in 2011 — an overtime game in which not one touchdown was scored by either team. And the SEC is the conference that as recently as 2008 had a 3-2 final score — albeit in bad weather — with Auburn edging Mississippi State.

Given the cyclical nature of football, perhaps the SEC will see such results again someday. But probably not in the near future.

"Everybody's trying to evolve to be more open, spread, distribute the ball," said Florida defensive coordinator Todd Grantham, who last weekend saw LSU gain 511 total yards in a 42-28 victory over the Gators. "That's why you're probably looking relative to five years ago probably numbers are up as far as offensive production and things like that.

"People are trying to find ways to get players balls in space and they're doing a good job with it. So as a defense, you've got to continue to work and understand what's happening and find a way to get stops."

While Orgeron was a former defensive lineman in college and spent much of his career as a defensive assistant, he was convinced when he came to LSU that an up-tempo spread was the offense of the future, and that the Tigers had to adopt it to compete for SEC and national titles. That wasn't simply because of schematic advantages on the field. There's also the matter of using a scheme that appeals to elite recruits.

"I do believe in order for us to get where we want to go, first of all we had to change our scheme to score more points," Orgeron said. "In recruiting, that's where the guys want to be. ... They all played in this offense in high school."

Alabama coach Nick Saban was quick to point out that the SEC has had prolific offenses well before this most recent trend, such as Steve Spurrier's "Fun 'N Gun" scheme with Florida, or Tennessee's aerial attack when Peyton Manning was behind center.

But those appear to have been more exceptions than the norm in a conference that did not have a single quarterback taken in the first round of the NFL draft between 1976 and 1994, and hasn't had two first-round QBs in the same year since 1952 (Vanderbilt's Billy Wade and Kentucky's Babe Parilli).

That streak seems bound to end next spring when LSU's Joe Burrow and Alabama's Tua Tagovailoa — both currently seen as Heisman Trophy hopefuls — will be eligible for the NFL draft. Burrow, who's completed 79.6 percent of his passes for 2,157 yards and 25 TDs, is on pace to break LSU single-season passing records for yards and touchdowns, among others.

Saban said LSU's coaching staff — as well as some others in the SEC — have "done a great job of featuring the talent they have relative to the offensive system that they run."

"We've kind of changed how we do things here relative to the players that we have," Saban continued. "It starts always with the quarterback. So I think when you do that, you've got the opportunity for more explosive plays."

"You can look over for a bunch of years there at LSU. They've always had great skill players. They've just had a certain way they chose to play," Pruitt said. "Same way in Tuscaloosa. There was a certain mindset of how they wanted to play the game and win the football game, and they had success."

But this weekend he's preparing for an Alabama offense averaging 536.8 yards per game, including 366 through the air.

"They definitely have a lot of playmakers. It's given them an opportunity to recruit some of the best skilled players in the country based off how they've played," Pruitt said. "Good players want to play with good players."