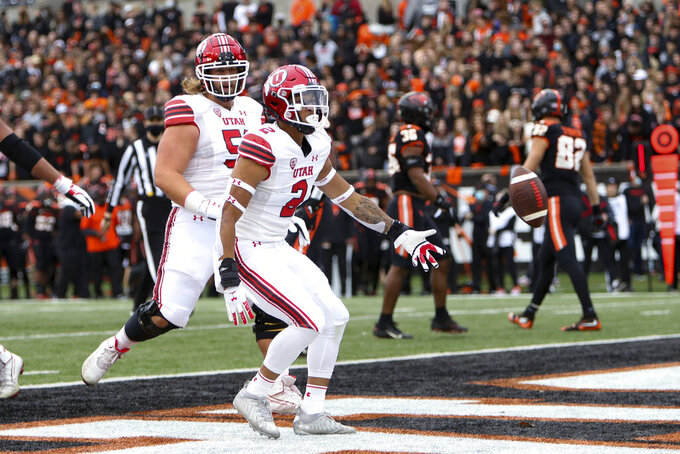 Utah running back Micah Bernard (2) celebrates after scoring a touchdown against Oregon State during the first half of an NCAA college football game Saturday, Oct. 23, 2021, in Corvallis, Ore. (AP Photo/Amanda Loman)

CORVALLIS, Ore. (AP) — Oregon State took a pretty good shot from Utah in the first eight minutes but the Beavers never wavered and responded with an all-around performance that put them a win away from a bowl berth.

Luke Musgrave blocked and returned a punt for a touchdown, B.J. Baylor rushed for over 100 yards and a score, and Oregon State rallied from an early deficit to defeat Utah 42-34 on Saturday night.

The Beavers (5-2, 3-1 Pac-12), who trailed 24-14 at the half, scored touchdowns on their first three possessions of the second half to take control.

One more win and the Beavers will be bowl eligible for the first time since the 2013 season.

“What’s in front of us is bigger than going to a bowl game,” fourth-year coach Jonathan Smith said. “And so the mantra is you try to win a game to make the next game bigger and that’s what we did.”

Quarterback Chance Nolan was 14-for-19 passing for 208 yards and two touchdowns with Trevon Bradford catching six passes for 74 yards and a score. Bradford also had two carries for 20 yards and a touchdown.

Utah entered the game allowing just 128.3 on the ground.

“First of all, I think they have the best offense in the conference, and statistically that will bear out,” Utah coach Kyle Whittingham said. “They run the ball better than anybody, they score more points than anybody, convert third downs better than anybody. … Their offensive line is extremely efficient. … They’re well coached, and they have an identity, and they know exactly who they are and what they want to be.”

Utah (4-3, 3-1) led in time of possession but missed a field goal and was stopped twice on fourth down from the 2-yard line.

The Utes took the opening kickoff and marched 75 yards with Rising connecting with Micah Bernard for a 14-yard pass for the score. Rising then fund Brant Kuithe wide open in the back corner of the end zone for an 11-yard scores and a 14-0 lead with 7:19 left in the first.

A 68-yard Baylor run set up a 1-yard pass from Nolan to Jack Colletto and the Beavers cut the deficit to 17-14.

Utah recovered a fumble at the 19 in the final two minutes of the half and Thomas finished the short drive with a 3-yard run for a 24-14 halftime lead.

The Beavers clawed back into it after the half, going 75 yards in 10 plays with Nolan connecting with Bradford for an 11-yard score to make it 24-21.

Oregon State took its first lead, 28-24, thanks to a blocked punt and 27-yard return for a score by Musgrave.

“That thing changes the game,” Smith said. “It wasn’t an all-out rush on the punt, we’re bringing four guys and they’re doing their job and believing they can make a play and they did.”

But Bradford’s 10-yard touchdown run put the Beavers back up for good and Baylor later scored from eight yards out to make it 42-31.

Alex Austin then broke up a fourth-down pass with 6:22 to play to give the Beavers possession with the 11-point lead. On third down, Nolan hit Tre-Shaun Harrison for 54 yards to get the Beavers out of a hole and help run time off the clock.

Colletto, a former quarterback, has been used often this season by the Beavers in short-yardage situations on offense. So it was no surprise when he was on the field with the Beavers at the 1-yard line.

But instead of taking the handoff – he has five rushing touchdowns this season – Colletto went out for a pass and made the first touchdown reception of his career to get the Beavers within 17-14 in the second quarter.

He is the 16th player to have an interception, a rushing touchdown and a receiving touchdown in the same season since 1996, and the second this year (Baylor’s Dillon Doyle).

UTAH: The Utes had a chance to start conference play 4-0 for the first time since joining the Pac-12. Instead, they drop into a tie with Arizona State for the South Division lead.

OREGON STATE: The Beavers had a week off to regroup from a loss at Washington State that ended a four-game winning streak. It didn’t look good in the first five minutes but the defense made some big stops and the Beavers remain in a tie for first in the North Division.