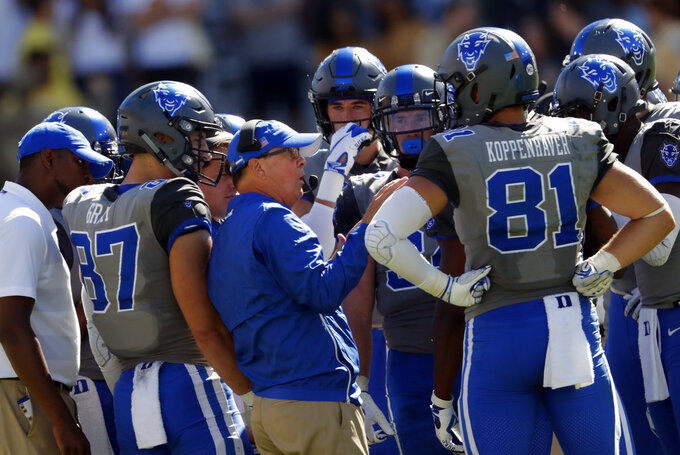 Duke head coach David Cutlciffe speaks to his players during the second half of the an NCAA college football game against the Georgia Tech, Saturday, Oct. 13, 2018, in Atlanta. Duke won 28-14. (AP Photo/John Bazemore) 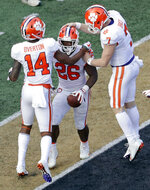 Things to watch in the Atlantic Coast Conference in Week 8:

No. 16 North Carolina State at No. 3 Clemson. The ACC's last two unbeaten teams meet with first place in the Atlantic Division on the line. Both teams are coming off open weeks and figure to be well-rested. The Tigers (6-0, 3-0) are the only team in league history to open four straight seasons with at least six consecutive victories. The Wolfpack (5-0, 2-0) are off to their best start since 2002, when Phillip Rivers was taking the snaps, and were a missed field goal at the buzzer from beating Clemson in Death Valley in their last trip there two years ago.

Florida State rushing offense vs. Wake Forest run defense. Something's got to give in Tallahassee. The Seminoles rank last in the conference in rushing, and at 92.8 yards per game are the league's only team that isn't averaging at least 100 yards on the ground. Maybe they'll get things fixed against a Wake Forest defense that has had serious trouble stopping big plays. Clemson had five touchdown runs of at least 50 yards in a 63-3 romp two weeks ago.

The N.C. State-Clemson game marks only the fifth matchup between undefeated ACC teams with five or more victories apiece, and only the second since the league expanded from nine teams in the early 2000s. Of the four previous times it's happened, the winner has gone on to claim at least a share of the national title three times (Georgia Tech in 1990, and Florida State in both 1993 and 2013).

Virginia appears capable of at least keeping it close in its visit to Duke. The Cavaliers are 7-point underdogs but are coming off a 16-13 upset of Miami that knocked the Hurricanes from the national rankings. Virginia has won three straight in the series with the Blue Devils, intercepting QB Daniel Jones a total of seven times in its most recent victories. Duke wants to build off the momentum of its 28-14 victory at Georgia Tech.

Duke seems to look for T.J. Rahming when the Blue Devils need a big play. Rahming caught four passes for 91 yards and a 48-yard touchdown in the Georgia Tech victory, and all four of his catches went for first downs or touchdowns while also becoming the fourth player in program history with 200 career catches. He'll try to find some seams in a Virginia defense that ranks third in the conference against the pass.