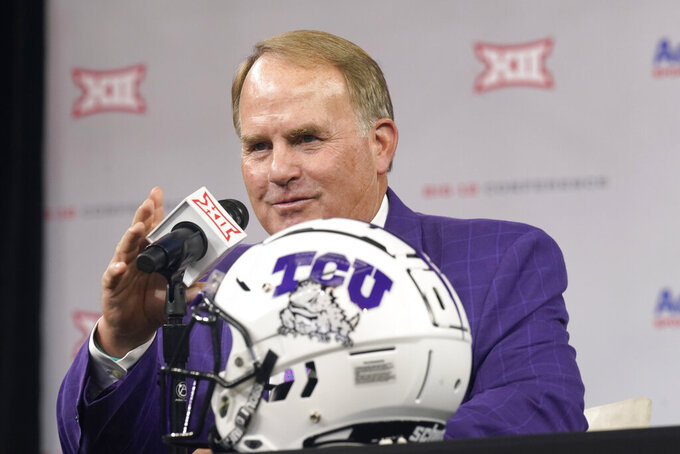 ARLINGTON, Texas (AP) — The Big 12 Conference would certainly benefit from an expanded College Football Playoff and likely never be left out again.

Under the proposed 12-team format that would still be at least a couple of seasons away, six-time defending Big 12 champion Oklahoma would have been in the playoff again last season. Iowa State, which had a league-best 8-1 record in the regular season before losing its first championship game in any conference, would have become the first Big 12 team other than the Sooners to make it.

Neither the Sooners or Cyclones — picked to finish 1-2 again this season — made it under the current four-team playoff that began seven seasons ago, when Big 12 co-champions TCU and Baylor were left out after the final CFP rankings.

“I think the expansion that’s been proposed is a great start. I commend the committee that put it together because you’ve got to put yourself out there. You’ve got to start somewhere,” Oklahoma coach Lincoln Riley said Wednesday at Big 12 Media Days.

“It addressed getting the conference champions in the playoff, which has needed to happen," he said. "It addressed a pathway for a Group of Five member to be able to get into the playoffs, which honestly hasn’t been realistic under the current system. In my mind, those are all great things.“

Iowa State coach Matt Campbell said he hadn't really reflected on the possibilities, or what could have been, but expressed the desire for a balanced approach.

“I’m a guy that played Division III football, and there is a playoff, and I think that part of it you certainly love. Obviously you love the bowl games and what that stands for. So that balance, I think, is what we’re trying to find,” Campbell said. “And I certainly think the more teams that are competing for that playoff come November and December, the more universities and student bodies are engaged in the entirety of the finish of the season.”

Big 12 Commissioner Bob Bowlsby was one of four members of the CFP management committee that over a two-year period considered various options, from remaining at four playoff teams to expanding to as many as 16. The subcommittee, which also included SEC Commissioner Greg Sankey, Mountain West Commissioner Craig Thompson and Notre Dame athletic director Jack Swarbrick, recommended a 12-team playoff that would include the six highest-ranked conference champions and six at-large choices.

“The first piece of feedback I got was there was great surprise we went as large as 12,” Bowlsby said Wednesday.

That proposal was presented last month to the full management committee — 10 conference commissioners and Swarbrick — and then to the 11 university presidents and chancellors who make up the CFP board of managers that has the final say.

The board of managers are next scheduled to meet Sept. 28 after getting feedback from their own schools and the ones they represent. Bowlsby expressed hope that the CFP is close to a resolution by time the board meets, though the earliest possibility for implementing any changes would still be 2023, and could be as late as 2026.

“Moving forward, we haven’t had a year in the Big 12 in the playoff era where our champion didn’t finish in a position where it was one of the top-six rated champions,” Bowlsby said. “While it’s not automatic, I think our chances of having our champion and perhaps one other in the event are pretty good."

With TCU heading into its 10th Big 12 season, coach Gary Patterson feels the Horned Frogs would have had multiple playoff appearances in a 12-team format.

In 2014, the first year of the four-team CFP, the Frogs were third in the rankings when they finished the regular season with a 55-3 win over Iowa State, the same day Ohio State beat Wisconsin 59-0 in the Big Ten championship game. The next day, the Buckeyes moved into the top four, with one-loss teams TCU and Baylor the first two teams out of the initial playoff. Kansas State was 11th in the final rankings that year.

Patterson said he likes the proposal for an expanded playoff, though isn't sure about the future of the conference championship games. He, like other Big 12 coaches, wants the remaining bowl structure to be preserved.

“Personally, just because less games, I wish they would have taken the championship games out of the equation and played that first week. Your first playoff week would have been first week in December,” Patterson said. “You throw finals and everything in there, you’ve got to have some time to be able to do all this where your kids can still be students.”

By John Zenor an hour ago
By Steve Megargee 3 hrs ago
By The Associated Press 4 hrs ago
By Ralph D. Russo 12 hrs ago
By Eric Olson 12 hrs ago