No. 1 Georgia goes for another blowout vs visiting Kent St 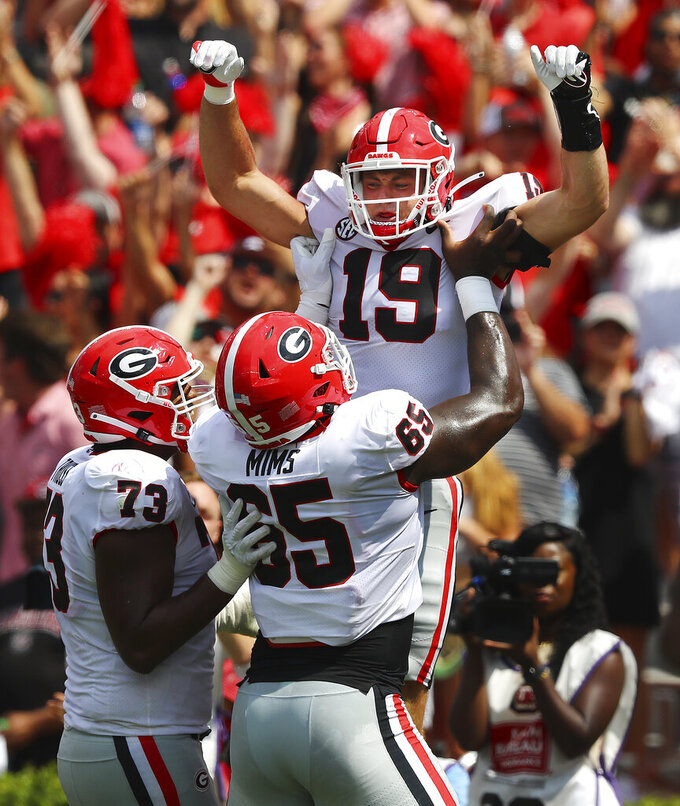 Georgia tight end Brock Bowers gets a hoist in the endzone by offensive lineman Amarius Mims after scoring his second touchdown of the first half of an NCAA college football game against South Carolina Saturday, Sept. 17, 2022, in Columbia, S.C. (Curtis Compton/Atlanta Journal-Constitution via AP)

Now, the reigning national champions are packing quite an offensive punch.

The Bulldogs (3-0) have outscored their opponents 130-10, and more of the same is expected Saturday when they host Kent State (1-2) between the hedges.

Georgia, a 44 1/2-point favorite, seems to have lost none of the hunger that carried the Bulldogs to their first national title in 41 seasons.

Led by sixth-year quarterback Stetson Bennett, the offense has displayed a plethora of weapons.

Eleven players had at least one catch in last week's 48-7 rout of South Carolina, totaling 339 yards and 16.1 yards per reception. Ten players ran the ball, combining for 208 yards and a 5.9 average.

Last Saturday, it was Brock Bowers taking the lead role. The sophomore tight end had five catches for 121 yards and two touchdowns, along with a rushing TD on a reverse.

“We’ve got a few of those guys that you've got to get touches to,” Smart said. “He’s certainly one that I think certainly everyone tries to find ways to get creative. You have to move him around because people know he’s going to be a target.”

Bowers is hardly a one-man show.

“They are a galaxy of college football stars," Lewis said. “They have talent all over the place. There are first-round draft picks everywhere.”

While the Georgia offense appears to be greatly improved, it's not like the defense has dropped off.

Even after losing five defenders in the first round of the NFL draft, the Bulldogs have surrendered only one touchdown through the first three games.

That came in the waning seconds of the victory over South Carolina, a meaningless score with the Bulldogs leading by 48 points.

Still, the Georgia defense was a bit ticked off about giving up a score that cost them a second straight shutout.

“I was really disappointed on that play," defensive back Dan Jackson said. “We just didn’t feel like we finished the game like we should have defensively."

Kent State will be facing its third opponent that is currently in The Associated Press Top 25.

Lewis has no complaints about this difficult stretch of games ahead of Mid-American Conference play. If nothing else, if helps him when he votes in the coaches' Top 25 poll.

“I have a pretty accurate description of who belongs where," he said. “I’ve gotten to see quite a few of them first-hand, live and up close.”

Three games into his college career, Malaki Starts has already made quite an impact in the Georgia secondary.

The freshman safety has two interceptions in his first three college games, including one against South Carolina that he returned 42 yards.

“He ran really fast and jumped really high when he was a ninth-grader," Smart recalled. “I talked to his dad that day, and we knew he was going to be some kind of special player. We just didn’t know how good he was going to be, and I still don’t think we know.”

Kent State is coming off a 358-yard rushing performance against Long Island.

It was the fifth time in the past two seasons the Golden Flashes have run for more than 300 yards.

This is only the second meeting between the schools.

Smart doesn't remember the first, even though he was playing for the Bulldogs.

In 1998, Georgia opened the season with a 56-3 victory over the Golden Flashes.

Smart was a senior safety for that Bulldog team, which went on to finish 9-3.

“I didn’t even realize we played them when I was here,” Smart said “It was a long time ago.”