No. 1 Georgia looking to finish perfect SEC run vs. Vols 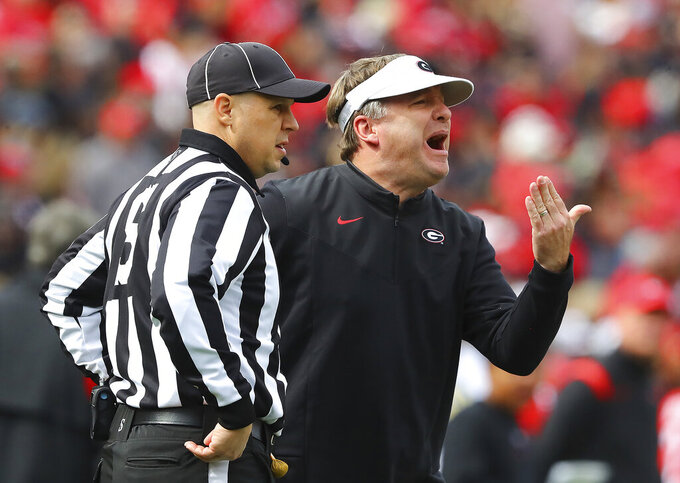 Georgia head coach Kirby Smart yells during the first half of an NCAA college football game against Missouri in Athens, Ga., Saturday, Nov. 6, 2021. The official at left is unidentified. (Curtis Compton/Atlanta Journal-Constitution via AP)

Line: Georgia by 20 1/2, according to FanDuel Sportsbook.

With a spot in the SEC championship already set, Georgia can remain undefeated and finish SEC play with a perfect 8-0 record for the first time in program history. Tennessee becomes eligible for a bowl with its next victory. The Vols are coming off an upset of a ranked team on the road. This time, an upset would be the Vols’ biggest win yet in coach Josh Heupel’s first season.

Georgia's defense against Tennessee's offense. The Bulldogs have allowed only 59 points this season for an average of 6.6 points per game, the fewest points through nine games allowed since 1971 when Georgia gave up only 53 points. Tennessee scores an average of 38.2 points a game, which is 15th nationally and third in the SEC. The Vols lead the nation running 2.92 plays per minute.

Georgia: DT Jordan Davis. The preseason All-American anchors the line of the nation's stingiest scoring defense, a unit that has allowed only five touchdowns all season.

Tennessee: QB Hendon Hooker. The graduate transfer from Virginia Tech is fourth nationally with a 190.01 passer rating, which is second in the SEC to Georgia's Stetson Bennett (197.34) Hooker has thrown 19 TD passes with only one interception since taking over as the starter.

Georgia is looking to clinch its first perfect record in SEC play since the league went to an eight-game format in 1992. The Bulldogs last perfect record in the conference was a 6-0 mark by the 1982 team. ... Since the beginning of the 2017 season, the Bulldogs are 26-2 against SEC East teams. ... Bennett is 9-2 as Georgia’s starting quarterback, while JT Daniels is 7-0. ... Georgia had 13 explosive plays (runs of at least 12 yards, passes of at least 16 yards) against Missouri, matching its season high. ... Tennessee is coming off its first win over a Top 20 opponent on the road since 2006. ... This is Tennessee's fourth straight game against a Top 20 opponent and starts a three-game homestand. ... Tennessee is 74-19-3 all-time in homecoming games. This is the first homecoming game for the Vols against an SEC opponent since Auburn in 2013.