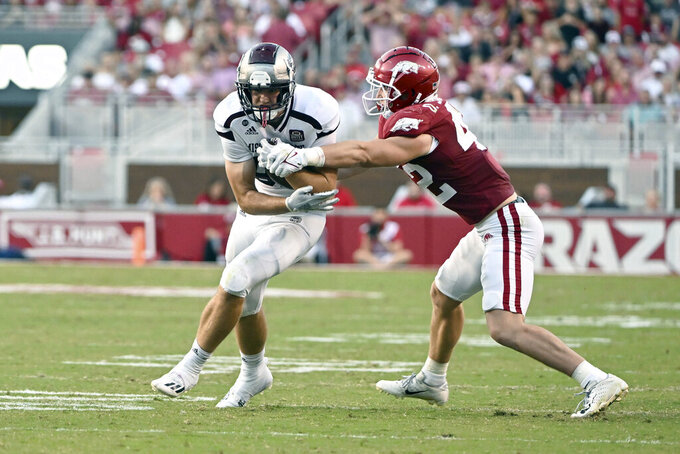 Line: Texas A&M by 1 1/2, according to FanDuel Sportsbook.

Arkansas has a chance to start 4-0 in consecutive seasons for the first time since 1988 and 1989, when the Razorbacks were still in the old Southwest Conference. Already with a win two weeks ago over South Carolina, they are looking to start 2-0 in SEC play for the first time since 2006. The Aggies' SEC opener comes in their first game away from Kyle Field. They had a 17-9 bounce-back win over then-No. 13 Miami last week after their loss to Appalachian State in Week 2.

Dual-threat Arkansas QB KJ Jefferson against the Aggies defense. Jefferson is averaging 313 total yards a game and has completed 55 of 78 passes (70.5%) for 770 yards with six touchdowns and one interception. He has also run for 169 yards and three scores. Texas A&M ranks ninth nationally in total defense, allowing 8.7 points a game, and is ninth in pass defense, giving up 147.3 yards a game.

Texas A&M: QB Max Johnson made his first start with the Aggies last week against Miami after coach Jimbo Fisher benched Haynes King. Johnson, an LSU transfer and son of Super Bowl-winning QB Brad Johnson, threw for 140 yards and a touchdown against Miami. He had 2,815 yards and 27 TDs passing for the Tigers last season.

Texas A&M RB Devon Achane is the only player in the nation to have a rushing, receiving and kickoff return touchdown this season. ... Arkansas RB Raheim “Rocket” Sanders has three consecutive 100-yard rushing games. He is the SEC’s leading rusher and fourth nationally with 440 yards (146.7 per game). He is averaging 6.3 yards per carry. ... Texas A&M is 26-0 when leading after the first quarter under Fisher. ... Aggies WR Ainias Smith has at least one catch in 26 consecutive games.