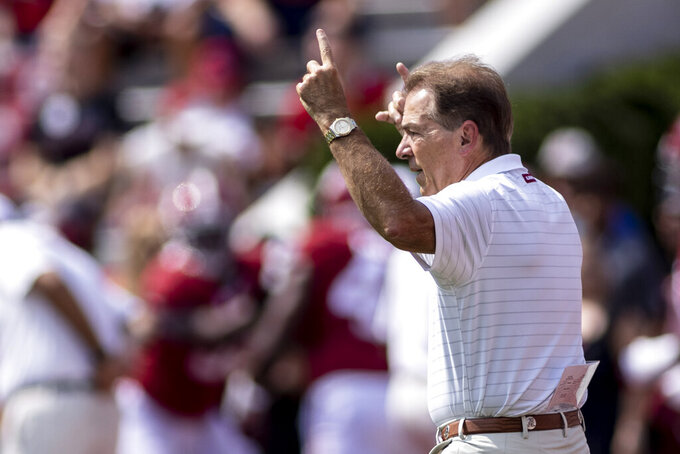 “How’s it feel to be such huge underdogs at home against top-ranked Alabama?”

If anyone was going to say anything controversial, it likely would have been the outspoken and vivacious running back. Pierce chuckled and then held back. Well, sort of.

“This is my first time hearing that,” he said sarcastically. “Fifteen points? Against Bama? They being nice, ain’t they?

“Everybody Bama plays is what, like 20-plus? They showing love to us, 15-point underdogs.”

The 11th-ranked Gators (2-0) surely will use external expectations as motivation when they host the defending national champion Crimson Tide (2-0) on Saturday, the Southeastern Conference opener for both teams. Alabama is now favored by 14 1/2 points, according to FanDuel Sportsbook.

“If you need me to motivate you to play in this game, you’re a little messed up,” Florida coach Dan Mullen said. “This is a big game.”

Alabama has won 16 in a row, a streak that started with a Citrus Bowl victory against Michigan on New Year’s Day in 2020. The Crimson Tide have been even more dominant against teams from the SEC’s Eastern Division, having won 31 straight since losing to Steve Spurrier and South Carolina on Oct. 9, 2010.

Florida, meanwhile, last beat Alabama in the 2008 SEC title game. The Gators have dropped all seven meetings since, including a 52-46 shootout in the league’s championship game last December.

Playing the Tide close has given Florida players confidence heading into the rematch.

The Gators are counting on two X-factors in this one: dynamic quarterback Anthony Richardson and a sold-out Swamp.

Richardson has been beyond impressive off the bench, raising questions about how long Mullen will stick with Emory Jones as his starter. Richardson, a redshirt freshman from Gainesville who is dealing with a strained right hamstring, has accounted for 467 yards and four touchdowns in limited action.

Dual-threat quarterbacks have given Alabama some trouble over the years, with Cam Newton, Johnny Manziel, Chad Kelly, Deshaun Watson, Trevor Lawrence and Joe Burrow topping the list of those who have toppled the Tide.

“We’re certainly looking forward to the challenge because it will kind of tell us a little bit about who we are, where we are, where we got to go, what we need to do to get there,” Alabama coach Nick Saban said.

Playing in the Swamp could pose problems, too, especially since Alabama quarterback Bryce Young is making his first road start.

The game is just the third sellout in Mullen’s four seasons, and a raucous home crowd was instrumental in winning the previous two. LSU’s Burrow was sacked five times and threw two interceptions, including one that was returned for a touchdown, in a 27-19 loss at Florida Field in 2018. Auburn’s Bo Nix often looked lost and was picked off twice in a 24-13 loss in Gainesville the following year.

Young, though, is far from ordinary. He has seven touchdown passes and no interceptions, the only player in Alabama history to be that effective in his first two starts.

“We know the challenges that are in front of us this weekend,” Young said. “We know how hostile the environment’s going to be. For me and really for everyone on the team, it’s something that Coach (Saban) is going to prepare for, something that we’re not taking lightly at all.”

The matchup between the SEC’s two most tenured coaches has been a mismatch. Mullen is 0-10 as a head coach against Saban, losing all nine meetings while at Mississippi State and reaching double digits last December with the Gators.

“You always want to challenge yourself against the best,” Mullen said. “You know that I love these. These games are fun for me. You get the opportunity to go out there and go play in an unbelievable environment against an unbelievable team, the crowd going crazy. This is what it’s all about. This is why we do this.”

Florida will be without starting middle linebacker Ventrell Miller, who had surgery this week to repair a torn biceps tendon. The fifth-year senior had started 23 of Florida’s last 26 games. Mohamoud Diabate is expected to play a bigger role moving forward.

The last defending national champion and No. 1 team in the country to roll into Gainesville was Miami in 2002. The Hurricanes somehow ended up being two-point underdogs in that one. They dominated, winning 41-16.