No. 13 Florida counting on improved defense in opener vs FAU 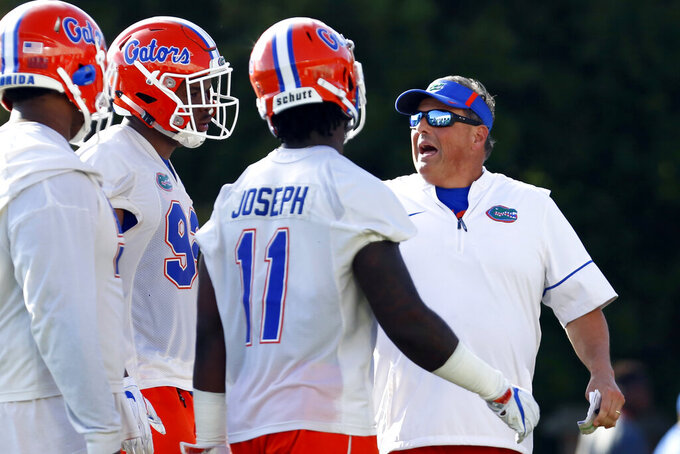 FILE - In this March 16, 2018, file photo, Florida defensive coordinator Todd Grantham works with some of the defense during NCAA college football practice in Gainesville, Fla. The 13th-ranked Gators get a chance to show how much they’ve improved. Florida opens the season Saturday night against Florida Atlantic. (Brad McClenny/Ocala Star-Banner via AP)

GAINESVILLE, Fla. (AP) — Florida’s defense was historically bad last season, so dreadful at times that fans were clamoring to fire everyone.

The Gators allowed 30.8 points a game, the school’s most in more than a hundred years, and were equally ineffective against the run and the pass. They were gashed for 144 points in three consecutive losses to end 2020.

No one was immune from season-long criticism. Not players. Not defensive coordinator Todd Grantham. Not head coach Dan Mullen.

Mullen responded by firing two assistants and giving Grantham a chance to fix the issues.

Now, the 13th-ranked Gators get a chance to show how much they’ve improved. Florida opens the season Saturday night against Florida Atlantic, which is entering its second year under ex-Florida State coach Willie Taggart and its first with Miami graduate transfer N’Kosi Perry at quarterback.

The Gators are 23 1/2-point favorites, according to FanDuel Sportsbook.

“I feel like all of us got a chip on our shoulder because we were seeing what everybody was saying about our defense, about our coaches, personal, about us,” linebacker Mohamoud Diabate said. “How can you not have a chip?

“So, yeah, we’re remembering all that, and we’re keeping it.”

Florida has reason to believe last year’s performance was a fluke. The Gators point to the coronavirus pandemic forcing the cancelation of 15 spring practices, eliminating an entire offseason of work and wiping out months of bonding opportunities.

When they did report for training camp last fall, they faced fewer live-hitting sessions than usual.

The Gators surrendered eight plays of 30 or more yards in a season-opening shootout at Mississippi and gave up 543 yards, including 205 on the ground, in a close loss at Texas A&M two weeks later. Throw in South Carolina, and Florida allowed 100 points through its first three games for the first time since 1917.

Mullen fired secondary coaches Ron English and Torrian Gray two days after a 55-20 loss to Oklahoma in the Cotton Bowl. He replaced them with Auburn’s Wesley McGriff and South Florida’s Jules Montinar.

Shelton and Newkirk are scheduled to start Saturday, and Truesdell will play in “a limited package” after joining the team this week as a graduate transfer, Grantham said.

Grantham expects his guys to bounce back and return to being a top-10 defense nationally. The Gators finished there nine times in 12 seasons between 2008 and 2019.

“I really do love the attitude of our players and the vision they have for the kind of team we want to be,” Grantham said. “We’re looking forward to moving forward.”

Perry has prepared for Florida before. The former Miami quarterback faced the Gators in Camping World Stadium early in the 2019 season. He was a backup to Jarren Williams.

Perry, who grew up about 40 miles south of Gainesville in Ocala, beat out incumbent starter Nick Tronti along with fellow transfer Michael Johnson Jr. and holdover Willie Taggart Jr. for the starting job. Perry has the experience of the Owls’ QB room, having thrown for 2,484 yards and 24 touchdowns in 24 games (nine starts) in three seasons with the Hurricanes.

The Gators will get their first real taste of life without Heisman Trophy finalist Kyle Trask, All-American tight end Kyle Pitts and dynamic receiver Kadarius Toney. All three were selected in the first two rounds of the NFL draft.

Quarterback Emory Jones, tight end Kemore Gamble and receiver Jacob Copeland get the first crack at filling their shoes, but the Gators have plenty of options at each position.

Florida will have its largest crowd on hand in nearly two years. There are no pandemic or social-distancing limits regarding capacity, which will be welcome sight for the home team’s players and coaches.

“You feel the crowd. You don’t just hear it, but you feel it,” Mullen said. “And I think that’s something that can really draw out things inside of you that you don’t get through last year, when your self-motivation and desire to go play. When you can feel the energy of a crowd, it lifts you up even more.”