No. 13 Wake Forest aims to keep rolling in ACC game with BC 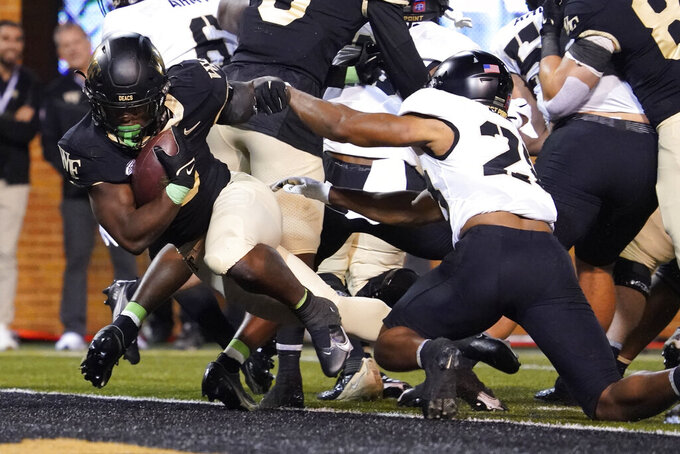 Wake Forest running back Justice Ellison, left, runs into the end zone for a touchdown against Army during the first half of an NCAA college football game in Winston-Salem, N.C., Saturday, Oct. 8, 2022. (AP Photo/Chuck Burton)

Line: Wake Forest by 20 1/2, according to FanDuel Sportsbook.

The Demon Deacons are coming out of a bye week trying to stay within reach of No. 5 Clemson atop the league's Atlantic Division race after losing to the Tigers in late September. The offense is rolling behind Sam Hartman and has scored at least 31 points in every game. The Eagles are also coming off an off week hoping for better offensive production considering they scored 14 or less in each of their three league losses.

Wake Forest's secondary vs. BC WR Zay Flowers. Flowers leads the ACC in catches (42) and receiving yards (556) to go with five touchdowns. Flowers has posted two 100-yard games this year, including a 151-yard effort in a loss to Louisville. The Demon Deacons have surrendered 14 passing touchdowns, the second-most in the ACC to North Carolina's 18.

BC: QB Phil Jurkovec. Jurkovec had a big performance against Louisville (304 yards, three TDs) but followed with just 188 yards against Clemson.

Wake Forest: RB Justice Ellison. He's had three straight solid outings, going for 73 yards against Clemson, 114 yards with a touchdown against Florida State and 96 yards with a score against Army.

Wake Forest's 247 points this year are the most through six games in program history. ... The Demon Deacons have won 11 straight games in the month of October. ... The Eagles have lost the past two meetings, with Wake Forest's win last year securing the Atlantic Division title. ... Boston College hasn't beaten an AP Top 25 opponent since 2014. ... BC ranks 10th in the Bowl Subdivision ranks by committing just 38.7 yards in penalties per game. ... BC has surrendered a league-high 22 sacks. ... Hartman's 88 career passing touchdowns is two shy of Clemson's duo of Deshaun Watson and Trevor Lawrence for fourth on the ACC's all-time list.