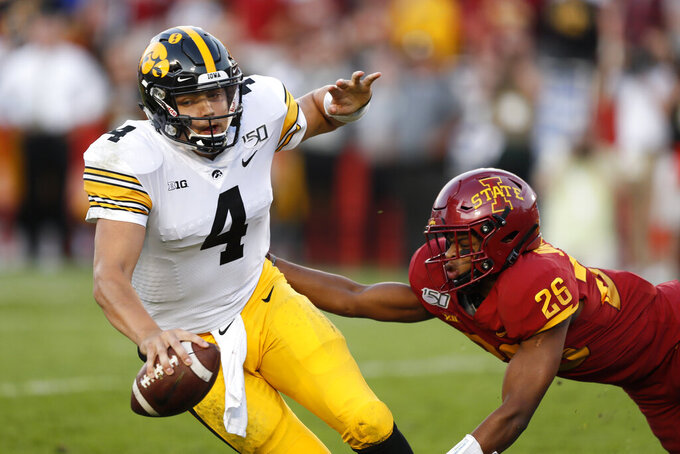 AMES, Iowa (AP) — Nate Stanley threw for 201 yards and ran for a score, and No. 19 Iowa made a big fourth-down stop late in the game, allowing the Hawkeyes to beat Iowa State 18-17 on Saturday night for their fifth straight win over the Cyclones.

Keith Duncan kicked four field goals for the Hawkeyes (3-0, 1-0 Big Ten), who also improved to 4-0 against Iowa State coach Matt Campbell in a game delayed nearly 3 hours because of lightning.

Trailing 18-17 in the closing minutes, Iowa State drove to the Iowa 34 before a false start, a slip by quarterback Brock Purdy and an incompletion brought up fourth-and-13. The Cyclones went for it and, after offsetting penalties led to a do-over, Purdy overthrew Deshaunte Jones near the end zone.

The Cyclones appeared to get another chance when they forced a quick Iowa punt. But the ball hit Datrone Young in the back and Iowa's Devonte Young recovered it, sealing the win for the Hawkeyes.

Iowa State (1-1) opened the scoring on a 51-yard double pass from Purdy to Jones — a converted prep quarterback — to La'Michael Pettway midway through the first quarter.

The Cyclones then moved ahead 14-6 just 57 seconds into the second half on a 73-yard strike from Purdy to Tarique Milton, who breezed past Iowa's banged-up secondary.

Iowa's defense stiffened, and Stanley's 1-yard touchdown plunge gave the Hawkeyes a 15-14 lead with 12:10 left. Connor Assalley's 26-yard field goal gave Iowa State the lead back with 7:46 to go, but Duncan answered from 39 yards with 4:51 left with what proved to be the game-winning kick.

Purdy finished with 276 yards passing and a touchdown for the Cyclones.

Iowa was on the road against its biggest rival and had to deal with two weather delays, turning an afternoon kickoff into a primetime affair. Yet the Hawkeyes still found a way to win, going 10 of 19 on third down and winning the turnover battle, 2-0.

Iowa State looked much better than it did in its opener two weeks ago, when it sleepwalked past Northern Iowa 29-26 in triple overtime. But this was yet another agonizing loss to the Hawkeyes for the Cyclones, who fell 44-41 in overtime two years ago in Ames.

The Hawkeyes might not move up that much, but the win was nevertheless impressive.

Iowa is off next week before hosting Middle Tennessee on Sept. 28.

By Ralph D. Russo 29 minutes ago
an hour ago
John Fineran an hour ago
By Cliff Brunt 2 hrs ago
By Pat Graham 2 hrs ago