No. 22 Syracuse looks to keep rolling at Wake Forest 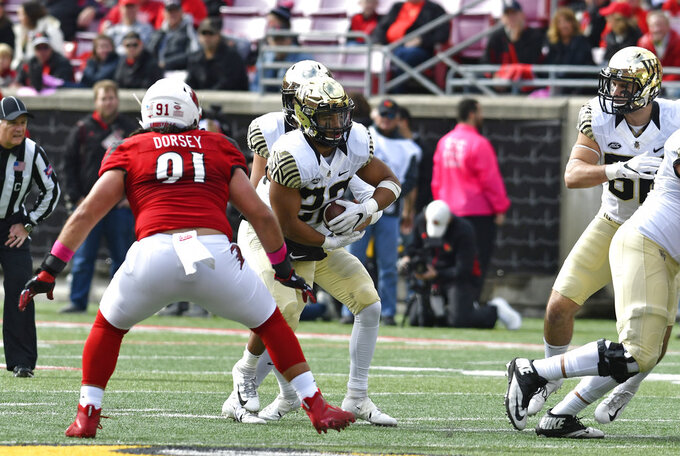 Wake Forest running back Matt Colburn (22) runs through an opening in the line during the first half of an NCAA college football game against Louisville, Saturday, Oct. 27, 2018, in Louisville, Ky. Wake Forest won 56-35. (AP Photo/Timothy D. Easley) 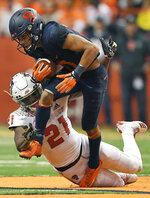 The Orange debut their first national ranking since 2001 on Saturday when they bring a high-powered offense to face a Wake Forest team that has had trouble containing big plays.

Syracuse (6-2, 3-2 ACC, No. 19 CFP) climbed into the Top 25 for the first time since the days of Dwight Freeney on the strength of a two-game winning streak that includes a victory over North Carolina State that knocked the Wolfpack from the polls.

The Orange rank seventh nationally and second in the ACC with a scoring average of 43.6 points. Among league teams, only No. 2 Clemson (44.1 ppg) ranks higher.

Dungey has done it all for the Orange, leading them in both rushing and passing while ranking second in the conference in total offense at 294 total yards per game. He poses quite a challenge for what statistically is the worst defense in the ACC.

Wake Forest is the only team in the league allowing more than 500 total yards per game, and the last two Top 25 teams that visited Winston-Salem — No. 3 Notre Dame and No. 2 Clemson — scored 63 and 56 points, respectively.

But there have been signs of progress. The Demon Deacons (4-4, 1-3) held Louisville scoreless in the fourth quarter of their 56-35 victory over the Cardinals . That was the first zero they'd put up in a quarter since the first quarter against Rice on Sept. 29, and it counts as something to build on.

"It isn't where we need to be," coach Dave Clawson said, "but it is better than a month ago."

Some other things to know about No. 22 Syracuse's matchup with Wake Forest on Saturday:

Wake Forest expects Dungey's best shot. That hasn't happened since he was a freshman in 2015, when his first start came in a win over the Demon Deacons. The 2016 matchup was played in wind and rain caused by Hurricane Matthew, and Dungey missed last year's high-scoring matchup with an injury. "We have never really gotten him healthy, at his best, since he got there," Clawson said. "When he is on, he is really good."

Dungey continues to move up in the ACC record book. He's responsible for 82 career touchdowns, ranking 10th in league history, and is 11 behind former N.C. State QB Russell Wilson, who's at No. 6. Dungey has 22 TDs this season — 13 passing, nine rushing — and has accounted for a conference-best 134 points.

Both teams want to play fast. Wake Forest ranks third in the Bowl Subdivision with an average of 85.8 offensive plays per game, while the Orange are sixth at 80.6.

A trend Syracuse wants to reverse: The Orange are 0-8 in November games under coach Dino Babers and has been outscored 399-186 in those games. Dungey missed six of them with injuries.

It'll be tough for these two teams to live up to last year's wild matchup in the Carrier Dome. Wake Forest scored 40 points in the second half to win 64-43. The teams combined for 1,355 total yards and 66 first downs — both ACC records.