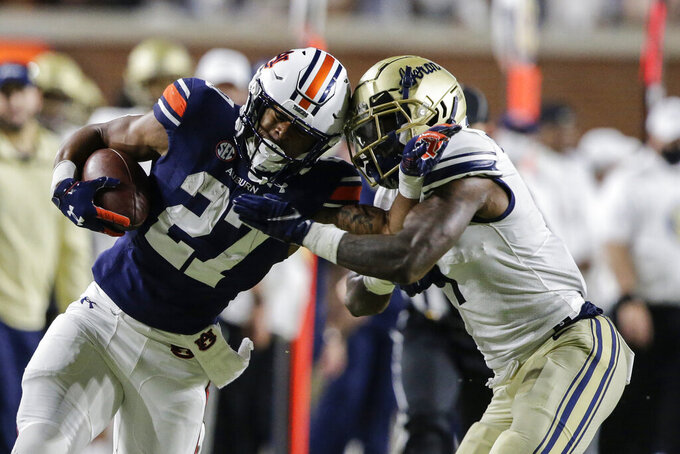 Auburn running back Jarquez Hunter (27) is pushed out of bounds by Akron cornerback Randy Cochran Jr. (1) during the second half of an NCAA college football game Saturday, Sept. 4, 2021, in Auburn, Ala. (AP Photo/Butch Dill)

Auburn is now ranked and fresh from a blowout win to open the Bryan Harsin era.

Now comes a different sort of test. The 25th-ranked Tigers host in-state FCS team Alabama State on Saturday, getting a quick check of their maturity and focus levels ahead of a bigger name opponent.

“Big thing this week, just our maturity level for everyone in this building and just handling Week 2,” said Harsin, the Tigers' first-year head coach.

They'll go from a 60-10 walkover over Akron to a game with the Hornets to a road game against No. 11 Penn State. So it might be tempting to overlook a Southwestern Athletic Conference team that opened with a 14-13 overtime win over Miles College.

Alabama State is collecting $575,000 to make the trip less than an hour down Interstate 85 but coach Donald Hill-Eley thinks the exposure and chance to play Southeastern Conference competition in a big stadium "is priceless.”

"It’s a win-win for us regardless of how it turns out,” Eley said.

Auburn edge defender T.D. Moultry played in 50 games before making his first career start against Akron. Moultry, who returned for a sixth year with the Tigers, tied for the team lead with seven tackles and had three tackles for loss while being credited with 1.5 sacks.

It was a good sign regarding his fit in Derek Mason’s defense for a player who needs just three games to tie Auburn’s record of most games played (54) shared by former running backs Tre Smith and Mario Fannin.

“I always told myself I was a walking millionaire; I still am,” Moultry said. “I just didn’t have the confidence, but now the confidence is there.”

Eley can point to one of his best former players, current Houston Texans offensive lineman Tytus Howard, to motivate his team for this game. Howard wound up being a first-round pick in the 2019 NFL Draft and Eley thinks his performance against Auburn was a big boost.

“They all are aware that Tytus Howard went into that ballgame as a potential (undrafted) free agent and ended up becoming a first-rounder because he showed that he could play at that particular level,” the Hornets coach said. “Not every young man we have here is SEC-caliber or Bowl-Division caliber, but we do have some, and for those guys that are at that level, it gives them an opportunity to showcase themselves.”

“It is better than what it was, yeah, so it continues to improve,” Harsin said.

Quarterack Ryan Nettles was the freshman of the year last season in the SWAC. He passed for 186 yards against Miles while running for 42 and a touchdown. Tailback Ezra Gray is an all-conference performer, who led the SWAC with 436 rushing yards in five games during the spring.

Auburn has faced a lower-level team from the state in most seasons lately, including a 63-9 win over Alabama State in 2018, the only other meeting. Other recent Alabama nonconference opponents include Samford and Alabama A&M. Jacksonville State even took the Tigers to overtime in 2015.