No. 3 Oregon visits Stanford in search best start in 8 years 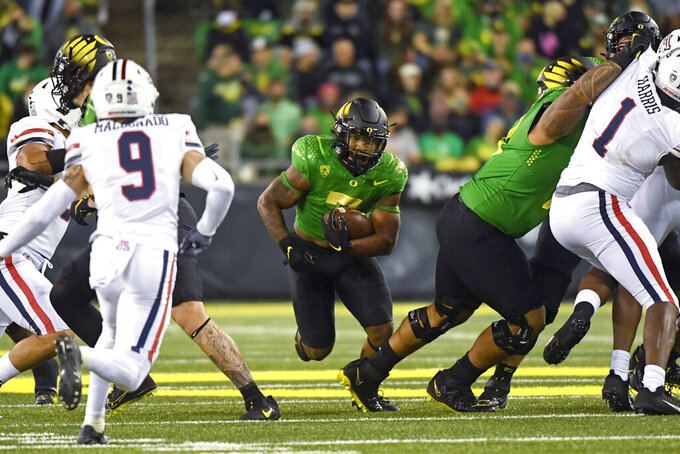 Line: Oregon by 7 1/2, according to FanDuel Sportsbook.

Oregon is looking for its first 5-0 start since 2013. The Ducks started 8-0 that season before losing at Stanford. The Cardinal are playing their third ranked opponent in the past four games, having beat No. 14 USC and lost to No. 24 UCLA.

Ducks RB CJ Verdell vs Stanford's run D. The Cardinal have allowed 209 yards rushing per game and now must deal with the dangerous Verdell, who ran for 105 yards and a TD in last year's meeting. Verdell needs 26 yards rushing to move into the top five in school history and is tied for eighth with 26 TD runs.

Oregon: Verone McKinley III. McKinley had his fourth interception of the season last week to tie for the most in the nation. He’s the first Oregon player with an interception in three straight games since the 2012 season.

Stanford: DE Thomas Booker. Booker is coming off a stellar game with 10 tackles, one sack, 1 1/2 tackles for loss and one QB hurry last week. He had one sack against the Ducks last season.

Oregon has won the last two meetings. ... Stanford has beaten a ranked Oregon team four times since 2009, the most losses to any opponent in that span for the Ducks when they were ranked. Two of those wins came when Oregon was ranked in the top three. ... The Ducks lead the nation with 13 takeaways, including five INTs last week vs. Arizona. ... The Cardinal haven't won a home game since Oct. 26, 2019, against Arizona. They lost their final two home games in 2019, their only one last season and then last week against UCLA. ... Stanford QB Tanner McKee threw a 56-yard TD pass to Elijah Higgins and a 52-yarder to Bryce Farrell last week. It was the first time since 2015 that the Cardinal had two TD receptions of at least 50 yards in the same game.