No. 4 Penn State committed to running back timeshare 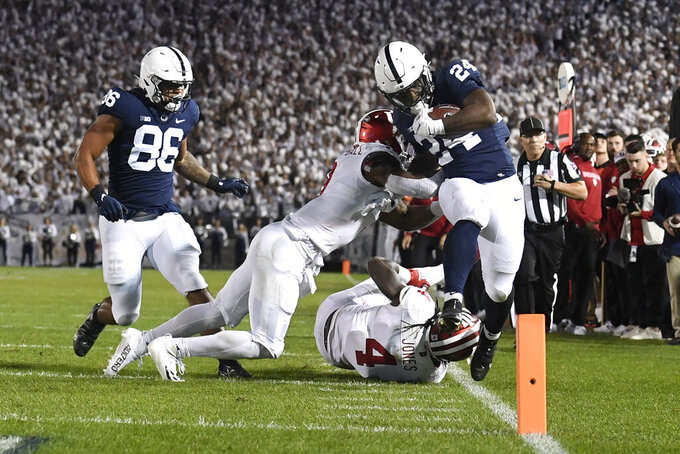 Penn State running back Keyvone Lee (24) is tackled by Indiana linebacker Cam Jones (4) in the first half of their NCAA college football game in State College, Pa., on Saturday, Oct. 2, 2021. (AP Photo/Barry Reeger)

STATE COLLEGE, Pa. (AP) — Penn State coach James Franklin has always liked to use a lot of running backs and he’d like to see one assert himself eventually this year.

Not only would more big plays in the running game help balance out the No. 4 Nittany Lions’ offense, they’d certainly come in handy against No. 3 Iowa's hard-nosed defense on Saturday.

“You’d love for somebody to really jump out and say I’m going to get the majority of the reps and the other guys are going to rotate in. I wouldn’t say that that’s necessarily happened yet,” Franklin said. “It’s somewhat similar to how I thought it would play out. I probably thought we’d have a little bit more production, again, but that’s not just on them, that’s all of us.”

Penn State will head to Iowa City with four backs — Noah Cain, Keyvone Lee, John Lovett and Devyn Ford —who’ve split reps with mixed results. The Nittany Lions rank 11th in the Big Ten and 93rd in the country in rushing. Although they’re coming off their best outing of the season, they’ve managed just 132.6 rushing yards per game.

Meanwhile, the offense has been carried by a strong passing game, led by quarterback Sean Clifford and his favorite target Jahan Dotson. The two have already combined for nine plays of 15 yards or more and six of 25 or more.

The team’s running backs, however, have struggled to break tackles, cut to open space and pound for short yardage. The Nittany Lions have converted just three of their last 11 third- and fourth-and-short situations.

By design, they should be much better.

“All our plays are designed for us to gain 10 yards or 5 yards,” Lee said. “So you just read your keys, press the holes that you’re supposed to press, and they just open up.”

But sometimes they’re missing them. As a result, the timeshare has only grown murkier over the last two weeks.

Lovett, who transferred from Baylor after running for 1,803 yards in four years, has leads the group with 21 carries in that span. Lee was pressed into early down work early last year after Cain broke a foot in the season opener and has 15 carries. Cain has 12 and Ford three.

Clifford said each back is unique.

“We have one of the best running back rooms, if not the best, in the country in my opinion,” Clifford said. “Each guys brings extreme value to this team and this offense.”

Lovett is more of a speed guy who’s factored in on kick return, but he’s also stood out in pass protection. Notably, he sent blitzing Indiana defensive back Raheem Layne flying last week.

Lee has shown the most sizzle so far with seven runs of 10 or more yards, by far the most of the group. A pair of runs last week, one for 44 and another for 21, were the team's most electric runs yet this year.

On the first, Lee burst through a big hole on the right side and outran all but one Indiana defender. On the second, he appeared to stall out in the backfield but freed himself with two quick cuts left to set his team up in the red zone.

Cain’s workload has notably decreased. Although he hasn’t missed a game, Franklin said the junior “got dinged up” in the second game against Ball State when he handled 20 carries. That was Cain’s biggest workload since he ran 22 times for 102 yards and a touchdown as a freshman at then-No. 15 Iowa in 2019.

The Hawkeyes are even tougher this time around. They’re allowing just 87 rushing yards per game.

“This is going to be one of those types of games,” Franklin said. “We’re going to have to grind it out and help our defense out based on who they are as an entire organization.”