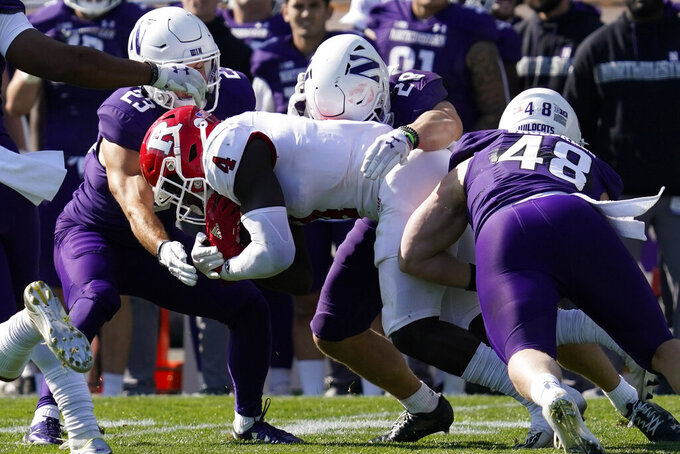 Line: Michigan by 23 1/2, according to FanDuel Sportsbook.

Michigan is off to a 6-0 start for the first time since 2016, Jim Harbaugh’s second season as head coach. The Wolverines finished that season at 10-3, losing to Florida State in the Orange Bowl. A victory on Saturday would set up a top 10 showdown with in-state rival Michigan State, which entered its bye week undefeated. Northwestern is seeking its first road victory of the season but hasn't defeated the Wolverines since a 21-14 road triumph in 2008.

Michigan: DE Aidan Hutchinson is widely considered the team’s top NFL prospect, a potential high first-round pick. Hutchinson leads the Wolverines with 5 1/2 sacks and he’ll be hungry to add to that total after failing to record one the last two games. He was credited with a season-high six tackles in the team’s 32-29 win at Nebraska on Oct. 9.

Northwestern: WR Stephon Robinson Jr. transferred from Kansas after an injury-marred season in which he caught just two passes. Robinson has emerged as the Wildcats’ top threat, exceeding 100 receiving yards for the past two games, including five catches for 115 yards against Rutgers. He will have to deliver another big outing against a Wolverines secondary that has allowed nine passing touchdowns.

Michigan has 21 rushing touchdowns while allowing just two this season. The Wolverines lead the Big Ten in rushing. ... The Wolverines have won 33 of the last 37 games between the two schools, dating to 1966. ... The Wolverines are among the nation’s top 15 in both scoring offense and defense. ... The Wildcats’ most recent victory over a top 10 program was against then-No. 10 Wisconsin last November. ... Wildcats DE Adetomiwa Adebawore recorded four tackles for loss against Rutgers, tied for the second-highest total in a game by a Northwestern player. ... Northwestern coach Pat Fitzgerald is 1-8 against Michigan.