No. 7 Utah opens with unprecedented hype vs Florida, Napier 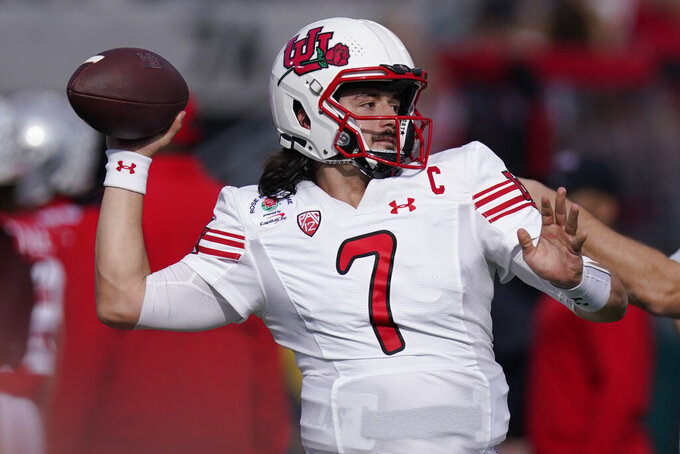 FILE - Utah quarterback Cameron Rising warms ups before the Rose Bowl NCAA college football game against Ohio State, Saturday, Jan. 1, 2022, in Pasadena, Calif. Rising isn’t facing a battle to be Utah’s starting quarterback heading into a new season. Rising cemented his spot atop the depth chart when he led the Utes to their first ever Pac-12 championship and Rose Bowl berth a season ago. (AP Photo/Mark J. Terrill, File)

Line: Utah by 2 ½, according to FanDuel Sportsbook.

Defending Pac-12 champion Utah opens with its highest preseason ranking in school history. The Utes travel to Gainesville for the first time since 1977 and will try to hand Florida its first season-opening loss at home since 1989. The Gators own the NCAA’s longest active winning streak in home openers at 32. None of the previous victories came against ranked teams. The game also marks the debut of new Florida coach Billy Napier, who led Louisiana-Lafayette to four consecutive Sun Belt Conference championship games before replacing fired Dan Mullen in November.

Utah: Brant Kuithe and Dalton Kincaid give the Utes one of the best tight end combinations in college football. As juniors in 2021, they combined for 86 receptions for 1,121 yards and 14 scores.

Florida: QB Anthony Richardson could be the most dynamic player on the field. The Gainesville native started just one game as a freshman last season – against top-ranked Georgia and its dominant defense – and looked overmatched. He ended up missing five games with various injuries, making his health a top priority in 2022.

Utah sold its ticket allotment and is expecting thousands on hand for the most anticipated season opener in school history. … The Utes are 27-3 in non-conference, regular-season games since joining the Pac-12 in 2011. … This is Utah’s first game against a SEC opponent since upsetting Alabama 31-17 in the 2009 Sugar Bowl. … Utah LB Mohamoud Diabate, who made 89 tackles for Florida last season, will make his Utes debut in his old stomping ground. … Florida is paying Utah $500,000 to make the trip to Gainesville. The Gators open the 2023 in Salt Lake City and will get a similar cut. … The last Florida coach to lose his debut was Charley Pell in 1979.