No. 9 Oregon regroups after Stanford loss, ready to host Cal 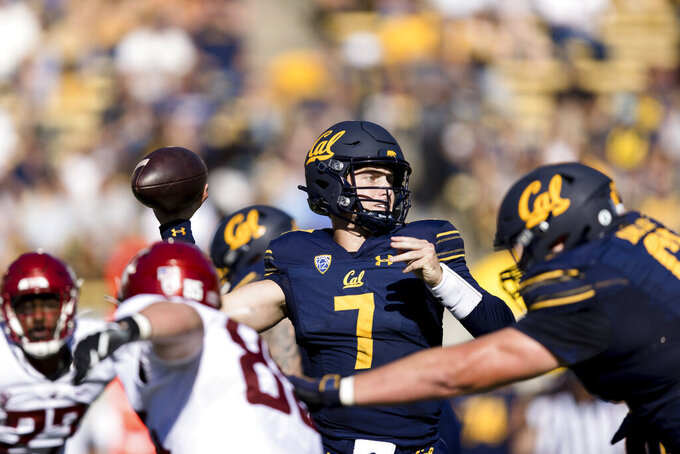 EUGENE, Ore. (AP) — The ninth-ranked Oregon Ducks got a week off to regroup for the second half of the season after a disappointing loss to Stanford that may ultimately impact their playoff chances.

“We’ve moved on, and we had that bye week, and now it’s just you ball it up, you throw it away. We know what happened and we don’t want to let it happen again," said defensive back Verone McKinley III. "So taking that and using it as fuel, the right fuel, you don’t want to use it as a negative but in a positive way and carrying it over. So I'm excited to see how we perform against Cal.”

McKinley shares the national lead for interceptions with four this season. A three-year starter, he's earned his nickname “The General” for his leadership on defense.

“The second part of the season is here so it’s like you've got to reset, regroup. We've got to get back to the basics, back to what we’ve done well, correct what we’ve done wrong. I think that’ll help us game by game. And take it one game at a time — can’t look further, you can’t care about rankings, you can’t care about the playoffs, all the other stuff. You’ve got to focus on the task at hand,” McKinley said.

He'll be key for the Ducks in defending Cal quarterback Chase Garbers, who leads the league in total offense with an average of 281.2 yards a game and ranks third with an average of 249 passing yards. He’s had a pair of 300-yard passing games this season, both on the road.

Cal, which is also coming off a bye, defeated Oregon last season in Berkeley, 21-17, with Garbers accounting for a pair of touchdowns, one via pass and the other on a keeper. But the Golden Bears have struggled this season with just one win coming against Sacramento State.

Because of that, Cal coach Justin Wilcox said there's not too much to take from last season's game.

“Last year was last year and we’re focused on playing better as a team, that’s what we need to do,” Wilcox said. “I don’t feel like the guys are lacking confidence, we just haven’t finished games. So our job is to show the players how we can do that better, how they can do it individually better and we can do it better as a team to come out on top.”

The Ducks used their bye week to heal up from some nagging injuries, but two key players are out for the rest of the season: running back CJ Verdell and safety Bennett Williams.

Verdell, who led Oregon with 406 yards rushing and six touchdowns, injured his left leg during the Ducks' 31-24 overtime loss to Stanford. Williams, who had three interceptions this season, broke his leg in practice before the game.

Coach Mario Cristobal said the Ducks will rely on Travis Dye and their other backs to pick up the slack in the running game.

“We typically play two heavy and then a third back gets a couple of reps. It’ll be somewhere divvied up between three guys," Cristobal said. "The actual percentage of carries will be determined how each particular back can handle it, starting with Travis. He’s handled it really well. He’s bigger, he’s stronger and he’s done a great job for us.”

For the Golden Bears, wide receiver Nikko Remigio and offensive lineman Will Craig are expected back from injuries this week.

Running back DeCarlos Brooks remains week to week and Wilcox didn’t have an update on outside linebacker Kuony Deng.

“It’s the extended period,” Wilcox said of Deng, who injured a leg in the first half of a Week 2 loss to TCU.

Wilcox grew up in Eugene and played at Oregon under coach Mike Bellotti. He graduated with a degree in anthropology. Now in his fifth year as coach of the Golden Bears, going home to face the Ducks isn't quite as emotional as it once was.

“It’s a great environment, a hostile environment,” he said about Autzen Stadium. “They’ve got a hell of a team and we’re looking forward to competing Friday night.”