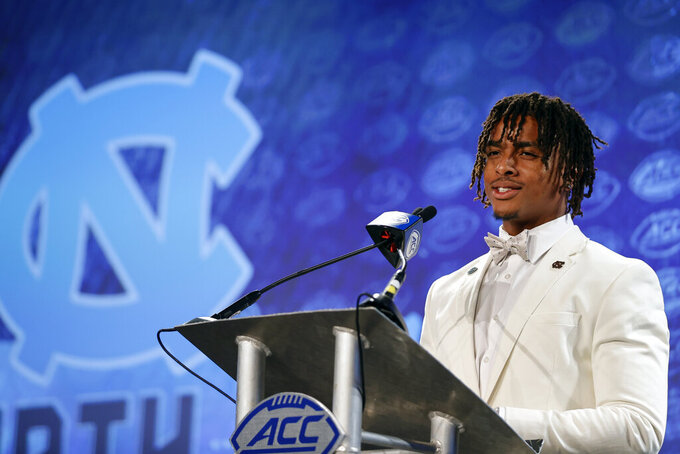 The Rattlers won nine games in the Championship Subdivision last season and would love a statement victory against a Power Five team like North Carolina. The Tar Heels will look to get settled at quarterback and elsewhere on the roster before a potentially tricky trip to Appalachian State next week — a team that won 10 games last season.

Florida A&M QB Rasean McKay vs. North Carolina's pass defense. McKay threw for 22 touchdowns against just five interceptions. The Tar Heels were near the ACC bottom with 28 TD passes allowed. McKay connected on less than 58% of his throws last year.

Florida A&M: LB Isaiah Land led Division I with 19 sacks and 22.5 tackles for loss as he won the Buck Buchanan Award as the best defensive player in the FCS. He set a school record with five sacks in a win over South Carolina State last season.

North Carolina: QB Drake Maye will get first crack at taking over for Sam Howell, the starter the past three years. Coach Mack Brown chose Maye after a fall camp competition with Jacolby Criswell. Brown made it clear that Criswell will get chances, especially if Maye and the offense bog down.

Florida A&M of the FCS still brag on its FBS victory, 16-13, over Miami and coach Howard Schnellenberger in 1979. ... North Carolina started last year in the top 10, but fell out of the rankings after losing three of its first six games. ... Probably the Rattler with the most experience against the Tar Heels is coach Willie Simmons, who played them twice in three seasons at Clemson from 2000-2002. Simmons threw for 228 yards and four TDs in a 38-24 victory over North Carolina in 2000. ... North Carolina is 5-4 all-time in August. The only game the Tar Heels played earlier than this was on Aug. 25, 2001, a 41-27 loss at Oklahoma. ... North Carolina WR Josh Downs set a program mark last season with 101 catches for 1,335 yards. He became just the fourth ACC player with 100 or more catches.