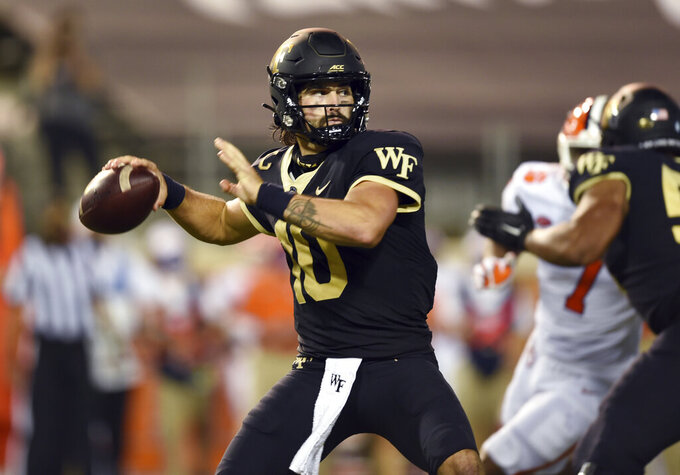 As the Atlantic Coast Conference worked Tuesday to reschedule another league game postponed because of a COVID-19 outbreak within one of its teams, the Mountain West was zeroing in on a possible late October start to its football season.

No. 7 Notre Dame’s game at Wake Forest on Saturday was postponed after positive COVID-19 tests landed 13 Fighting Irish players in isolation and another 10 in quarantine.

The schools said they were working with the ACC to reschedule the game. Both teams have off Oct. 3.

Mountain West university presidents moved up a scheduled Friday meeting to Thursday, a person with knowledge of the meeting told The Associated Press. The person spoke on condition of anonymity because the league is not making its move toward a possible return to fall sports public.

It was unclear whether the Mountain West presidents would vote Thursday on any proposals, the person said.

Mountain West athletic directors are aiming for an Oct. 24 or Oct. 31 start for the football season. The conference is close to an agreement that will provide its 12 schools with the capacity to perform daily COVID-19 antigen tests on its athletes, the person said.

Mountain West Commissioner Craig Thompson told AP last week the conference would not move forward on a fall football season without its schools having the ability to conduct rapid-result antigen testing on its athletes.

The Mountain West postponed its fall sports season on Aug. 10, the day before the Big Ten and Pac-12 did the same.

The Pac-12's CEO Group of presidents and chancellors is also meeting Thursday and is expected to make a decision on whether the conference can start its football season as soon as Halloween weekend. The Pac-12 announced early this month it had acquired daily COVID-19 testing for its members.

The Big Ten announced last week it will kick off its football season the weekend of Oct. 24. The conference plans to start testing its fall sport athletes daily on Sept. 30.

The hope is daily testing will prevent those who are infected from spreading the virus and cut down on the number of people who end up in quarantine because they were in close contact with someone who tested positive.

The conferences that are currently staging fall football seasons have been testing athletes at least three times per week, but not daily.

Notre Dame said 94 football players were tested for COVID-19 on Monday and of those seven were positive. Those players were in isolation along with others who tested positive last week.

The school is pausing all football-related activities until further testing is complete.

“We managed an increase in positivity rates in August, and the players handled it wonderfully," Notre Dame coach Brian Kelly said. "We knew COVID would present challenges throughout the season, and we’ll always put student-athlete health and safety at the forefront of our decision making. We look forward to resuming team activities and getting back on the playing field.”

Notre Dame (2-0) opened the season with two home games and held several players out of last week's victory against South Florida without explanation.

The Fighting Irish are playing football as a member of a conference for the first time this season. Notre Dame usually competes as an independent in football and in the ACC in most of its other sports. The school and the conference agreed to the arrangement to help each get through this pandemic-disrupted season.

Notre Dame-Wake Forest is the 18th game involving major college football teams to be postponed or canceled by COVID-19 issues since Aug. 26 and the third ACC game (North Carolina State at Virginia Tech and Virginia at Virginia Tech were rescheduled).

“I know everyone involved is saddened to be unable to play this weekend, but based on the circumstances it is the right decision," Wake Forest athletic director John Currie said.

Also Tuesday, No. 18 BYU announced that its first next two games will be played without fans at LaVell Edwards Stadium in Provo, Utah. The school said health officials in the state had moved Provo from low to moderate COVID-19 risks, which prompted the switch to no fans for Saturday's game against Troy and the Oct. 2 game against Louisiana Tech.

BYU had to postpone its game last week at Army after having players test positive for COVID-19.

By Will Graves an hour ago
By Anne M. Peterson 5 hrs ago
5 hrs ago
By Greg Beacham 6 hrs ago
6 hrs ago