Orgeron begins LSU exit with SEC visit to No. 12 Mississippi 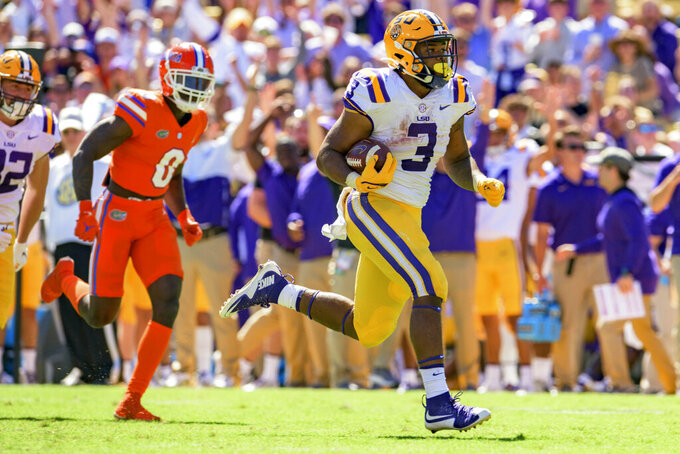 LSU running back Tyrion Davis-Price (3) scores a touchdown against Florida in the second half of an NCAA college football game in Baton Rouge, La., Saturday, Oct. 16, 2021. (AP Photo/Matthew Hinton)

Things to watch in Week 8 in the Southeastern Conference:

LSU (4-3, 2-2) visits No. 12 Mississippi (5-1, 2-1) in a West Division matchup. Ed Orgeron enters the first of his final five regular season games as LSU coach after he and the school agreed on Sunday that he would not return after this season. The move comes after the Tigers halted a two-game slide with a 49-42 victory over then-No. 20 Florida behind Tyrion Davis-Price’s school-record 287 yards rushing. Orgeron’s dismissal comes 17 games after he and Heisman Trophy-winning quarterback Joe Burrow led LSU to an unbeaten national championship after the 2019 season. Meanwhile, second-year Ole Miss coach Lane Kiffin is basking in the Rebels’ 31-26 escape at Tennessee. Escape was almost a literal term as fans hurled debris and trash at the team in the final minute and halted play for more than 20 minutes. Kiffin held up one yellow golf ball as a souvenir. The game matches two of the SEC's top quarterbacks in LSU's Max Johnson and Ole Miss' Matt Corral, who have combined for 3,591 yards and 34 touchdowns this season. However, Corral's status is shaky after Kiffin stated that last week's game took a toll on his QB.

Tennessee’s offense vs. Alabama’s offense. The offensive numbers alone suggest a possible shootout in Tuscaloosa, Alabama, between two of the nation’s top 16 units. Quarterback Bryce Young leads a Crimson Tide offense that’s averaging 45 points per game (fourth nationally), 482.6 yards overall (12th) and 316.1 yards passing (13th). They’re also coming off a 49-9 road beatdown of Mississippi State. Tennessee aims to regroup from the Ole Miss loss and brings in an attack averaging 39.3 points (11th) and 473 yards (16th). Something has to give, however, and ‘Bama’s defense will likely be a factor. The Tide are allowing just over 300 yards a game and return from a two-game road stretch with no intention on giving up points or yards on its turf.

Then there’s this going on in Tuscaloosa: Tennessee visits No. 5 Alabama with the monstrous mission of trying to snap a 14-game series losing streak to the Crimson Tide. Talk about a tall order: The Volunteers have been outscored 235-68 in the past five meetings alone, including last year’s 48-17 drubbing in Knoxville. FanDuel.com lists Tennessee as a 27½-point underdog.

Besides setting the school record for rushing yardage against Florida, Tyrion Davis-Price established the SEC’s 10th-highest single-game total. He also posted LSU’s sixth-highest total with 36 attempts. ... Ole Miss ran a school-record 101 offensive plays at Tennessee, edging its previous mark of 100 against Wyoming in 2004. The Rebels’ 510 yards also marked their fifth-highest output this season and second best in SEC play. ... Will Levis’ 32 completions against Georgia were the most by a Kentucky quarterback in an SEC road contest since Jared Lorenzen tossed the same number in Athens in 2001.

Alabama linebacker Will Anderson had one of the school’s most dominant defensive performances at Mississippi State with four sacks, joining Derrick Thomas and Leroy Cook as the only ones to do so in a game. He finished with six stops, was credited with six quarterback pressures and also batted away a pass in the rout. Anderson’s seven sacks and 15 tackles for loss lead the SEC, and he’s 29th in 6.4 tackles per game.