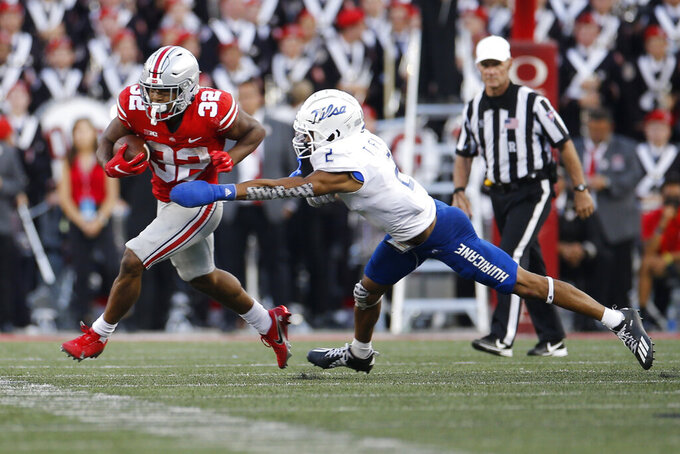 Line: Ohio State by 49 1/2, according to FanDuel Sportsbook.

The Buckeyes are going through some uncharacteristic struggles. After being upset by two-touchdown underdog Oregon in Week 2, Ohio State looked off-kilter again against less-talented Tulsa but emerged with a 41-20 win that was closer that the score indicated. The Buckeyes, whose No. 10 ranking is the lowest in nearly three years, should welcome another glorified scrimmage against Akron, a second-tier Mid-American Conference team.

Ohio State RB TreVeyon Henderson vs. Akron's defense. Henderson is making a case to be the next Buckeyes superstar. He broke Archie Griffin's single-game freshman rushing record with 277 yards against Tulsa and scored three dramatic touchdowns while averaging 9.1 yards per carry. The Akron defense is allowing 5.4 yards per carry, and gave up nearly 10 yards per carry in the 60-10 rout by Auburn in the season opener.

Akron: QB DJ Irons is completing 76% of his passes, and threw for 296 yards and three touchdowns last week in Akron's win over FCS school Bryant. With the issues Ohio State is having with pass defense, Irons could find some holes.

Ohio State: QB C.J. Stroud has put up some great numbers — thanks in part to his All-American receivers — but he has made a bunch of freshman mistakes and doesn't look comfortable yet. Stroud has thrown for 963 yards but has eight touchdowns against three interceptions. He said after last week's game that his arm has been hurting, too.

Akron has beaten Ohio State just once in eight meetings, but it came during the Grover Cleveland administration. The school prevailed 12-6 in September 1894 during a five-year stretch where the two schools met annually. ... Ohio State is 189-51-15 all-time against other Ohio schools and hasn’t lost to one since dropping a game to Oberlin in the 1921 season. ... Akron generated 514 yards of total offense last week's win over Bryant. ... Ohio State DBs have 24 pass break-ups in three games compared with 31 in all of last season. ... Buckeyes WR Garrett Wilson has caught a pass in 24 straight games. ... Akron LB Bubba Arslanian leads the team in tackles (37), solo stops (16) and assists (21).