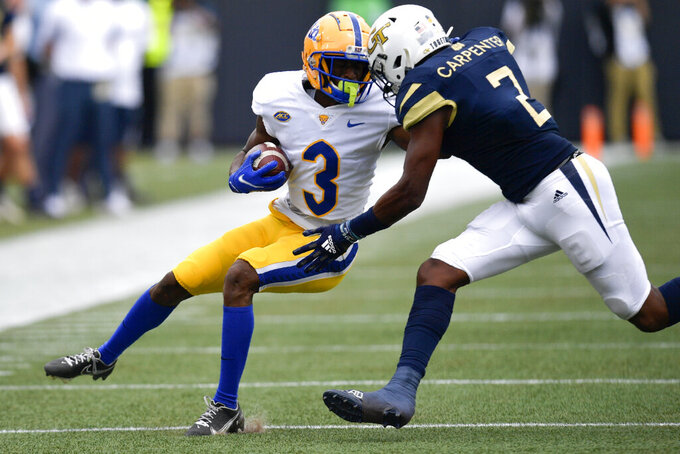 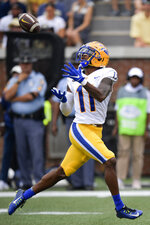 Pitt (4-1, 1-0 ACC) intercepted the first two passes thrown by Georgia Tech quarterback Jeff Sims, with linebacker John Petrishen returning the second 33 yards for a touchdown, to help the Panthers to a 42-14 lead by halftime on Saturday.

Those thefts by the Panthers were overshadowed by Pickett. The fifth-year senior quarterback repeatedly wiggled around in the pocket to buy extra time and complete 23-of-36 passes. On the season, he has passed for 19 touchdowns with just one interception, which wasn’t by Georgia Tech.

“He’s made a lot of money for himself coming back, I can tell you that,” Pitt coach Patt Narduzzi said. “He should be a Heisman candidate. ... He’s so smooth, so calm."

The Panthers are averaging 52.4 points per contest, and Pickett –- who is both patient and nimble when he drops back to throw –- has had help. On Pitt’s defensive side, Sims’ first pass wobbled as he was hit by Pitt defensive lineman Deslin Alexandre while throwing and the second was tipped by defensive lineman Habakkuk Baldonado.

Sims had a nice day after his first two pass attempts, completing 24-of-33 passes for 359 yards two touchdowns while rushing for another 38 yards.

But Tech (2-3, 1-2) struggled on what Collins and Narduzzi call the “money downs”. The Yellow Jackets advanced the ball effectively on a couple drives in the first half, but failed to convert any of its five third-down tries and misfired on two fourth downs in that time.

Pitt converted a combined 8-of-15 third and fourth downs. Tech was good on 3 of 15, and was stopped on fourth down in the shadow of the goal line three times while rushing for a total of 73 yards. Leading rusher Jahmyr Gibbs carried it 10 times for minus-10 yards.

“Hats off to Pitt. That Kenny Pickett is a really, really good player. Manages to keep plays alive and break contain when we had receivers covered,” Georgia Tech coach Geoff Collins said. “I went and sought him out after the game and told him out highly I thought of him."

Addison has 29 receptions for 524 yards and nine touchdowns for the season.

“He’s playing at a high level and obviously that helps Kenny on what we call scramble drills ... he cuts and gets open," Narduzzi said.

Pittsburgh: The Panthers buttoned up their play calling for the final quarter-plus, and still managed to total 580 yards with the help of 181 rushing yards. They ran the final 8:03 off the game clock, closing out a Tech’s 1-yard-line.

Georgia Tech: The Jackets hardly looked like the team that upset North Carolina a week earlier in a game with eight sacks. They had one against Pitt.

Tech fans were nearly euphoric a week earlier after the Yellow Jackets beat North Carolina 45-22 in Mercedes-Benz Stadium. After Saturday’s loss – the Jackets’ fourth straight to Pitt to drop to 5-11 all-time against the Panthers, Collins said, “So as good as last Saturday night felt, all the positive energy that we got and felt a week ago, exact opposite today.”

“They had a good scheme. They max-protected a lot ... he made some good plays with his feet,” Tech linebacker Ayinde Eli said about Pickett. Cornerback Tre Swilling added, “He has pocket awareness. He knew his escape routes.”

Pittsburgh: The Panthers will be idle next week before playing at Virginia Tech on Oct. 16.

Georgia Tech: The Yellow Jackets play at Duke next Saturday.