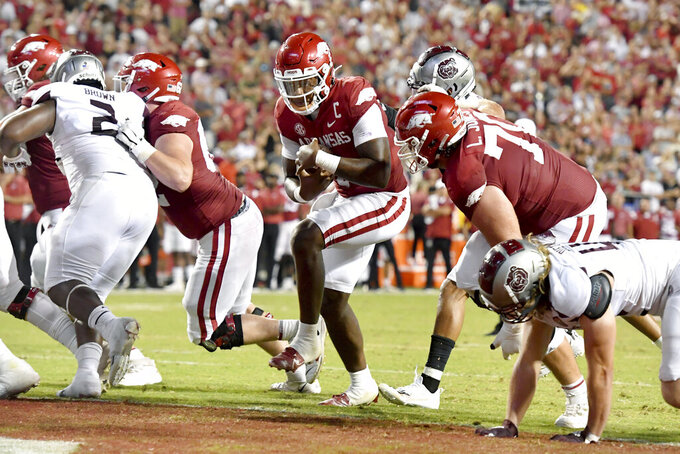 Arkansas quarterback KJ Jefferson, center, runs up the middle to score a touchdown against Missouri State during the second half of an NCAA college football game Saturday, Sept. 17, 2022, in Fayetteville, Ark. (AP Photo/Michael Woods)

“We were 4-0 at the time and it felt awful good ... we had lost nine in a row," said Pittman, the third-year Razorbacks coach. “I thought it was an important game for us to have as a win.”

That was quite a boost for the 10th-ranked Razorbacks (3-0, 1-0 SEC), who get a chance to do it again Saturday night when both teams play away from home for the first time this season. But neither will be on an opposing campus either — Arkansas meets No. 23 Texas A&M (2-1, 0-0) again at AT&T Stadium, the home stadium of the Dallas Cowboys.

Arkansas hasn't had consecutive 4-0 starts since 1988-89, which was still a couple of seasons before joining the SEC. The Hogs last won their first two conference games in 2006.

After joining the Razorbacks in the the SEC in 2012, Texas A&M won nine straight against its former Southwest Conference rival in a 78-game series that dates back to 1903. The Aggies play their conference opener after a bounce-back win over then-No. 13 Miami that followed their home loss to Appalachian State.

“Most definitely, we’re ready for SEC play,” said Aggies running back Devon Achane, the only player in the nation this season with a rushing, receiving, and kickoff return touchdown.

“Still got work to do by far. Nowhere close to perfect in anywhere we are. But I love the competitiveness. Love the togetherness. Love the guys pulling together,” coach Jimbo Fisher said. “I mean, coming off a tough week, come off a tough loss, guys bonded together, blocked out the noise, went and played.”

The Razorbacks are the national leader with 5.7 quarterback sacks a game. But when they aren’t getting to the quarterbacks, opposing teams are averaging 353 yards passing per game — which puts the Arkansas defense last among the 131 FBS teams in that category.

“Well, we have to get better, both of them, really. But obviously there’s a little bit more urgency of covering people,” Pittman said. “Now we can live with guys getting good throws. We can’t live with guys wide open. ... Somebody is going to beat us. They need to beat us with us attempting to cover the guy.”

Alabama transfer linebacker Drew Sanders has 28 tackles for Arkansas and is tied for the national lead with 5 1/2 sacks. The Razorbacks' eight sacks last week against Missouri State were their most in a game since 2012.

While Texas A&M has already changed starting quarterbacks, fourth-year Arkansas junior KJ Jefferson is averaging 313 total yards a game. The dual-threat QB has completed 55 of 78 passes (70.5%) for 770 yards with six touchdowns and one interception while running for 169 yards and three more scores.

Former LSU transfer Max Johnson got his first start for Texas A&M last week when inconsistent Haynes King was benched. While the Aggies won, and Fisher said Johnson “managed the game,” he was only 10-of-20 passing for 140 yards and a touchdown for the SEC’s worst offense (313.7 yards and 20.7 points per game).

This is the 12th time Arkansas and Texas A&M will play at the home of the NFL's Cowboys, who are owned by Jerry Jones, a co-captain of the 1964 Razorbacks team that went undefeated. The Aggies are 7-4 in the previous meetings there.

“Being in Mr. Jones' stadium is really neat,” Pittman said.

Fisher said he is still “torn at times” about neutral-site games — especially one that could have been been played in College Station. The Aggies did get to play their last 2020 “home” game in this series on campus during the COVID-19 pandemic.

The win over Texas A&M last September, after they had already won at home against future SEC foe Texas, pushed the Razorbacks into the top 10 for the first time since 2012. But they promptly dropped after a 37-0 loss to eventual national champion Georgia the following week, and didn't get back into the top 10 until winning their first two games this season. The Aggies began this season ranked sixth, in the top 10 for the third consecutive season, but plummeted 18 spots after being upset by Appalachian State.