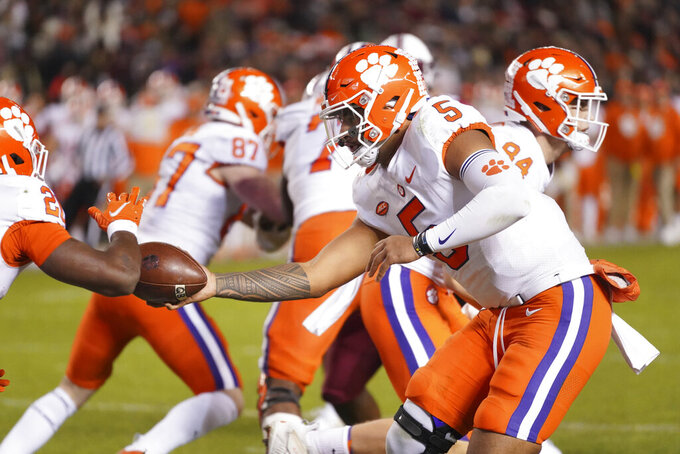 Clemson quarterback D.J. Uiagalelei (5) hands the ball off to running back Kobe Pace (20) during the second half of an NCAA college football game Saturday, Nov. 27, 2021, in Columbia, S.C. Clemson won 30-0. (AP Photo/Sean Rayford)

Clemson: LB James Skalski is a first-team All-ACC pick — one of four from the Tigers' defense — who leads the team with 97 tackles. Skalski has 4.5 tackles for loss, 2.5 sacks and 14 quarterback pressures.

Iowa State: Snapped a two-game skid with a 48-14 rout of TCU in the regular-season finale. Hall rushed for a career-high 242 yards and scored a career-best four touchdowns. He also broke Bill Burnett's record of 23 consecutive games with a rushing TD set from 1968-70.

Clemson: Opened the season ranked No. 3 but had uncharacteristic struggles before closing with a five-game winning streak. Even at 9-3, it was still a letdown for a team that had made the College Football Playoffs six years running. Now striving to reach double-digits in wins for the 11th consecutive season.

Iowa State: Heading to a bowl for a school record fifth straight season and the 17th in program history. Coach Matt Campbell is 2-2 in bowl games with the Cyclones.

Clemson: The playoff regulars extended their school-record bowl streak to 17 seasons, the fifth-longest in the nation.

15 minutes ago
By Stephen Hawkins an hour ago
4 hrs ago
By W.g. Ramirez 13 hrs ago
By Mark Anderson 13 hrs ago