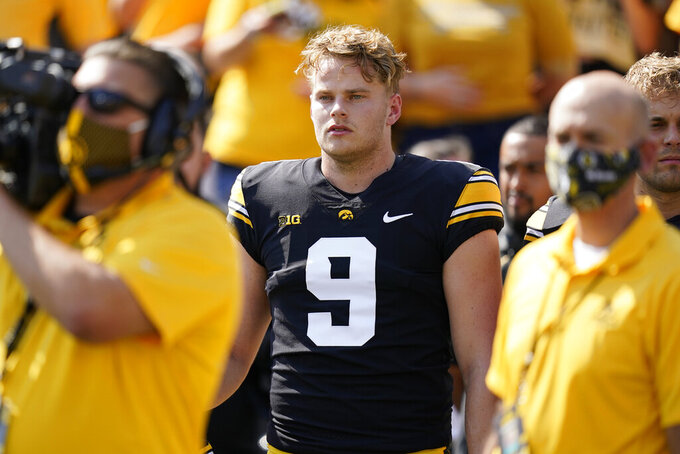 FILE - Iowa punter Tory Taylor (9) stands on the sideline before an NCAA college football game against Kent State in Iowa City, Iowa, in this Saturday, Sept. 18, 2021, file photo. Tory Taylor sells T-shirts that say "Punting Is Winning." Those words describe what's going on at No. 2 Iowa, where Taylor's punting has played a huge factor in the Hawkeyes' 6-0 start. (AP Photo/Charlie Neibergall, File)

IOWA CITY, Iowa (AP) — Tory Taylor is selling a T-shirt for charity that bears the three-word slogan “Punting Is Winning.”

No. 2 Iowa enters its home game against Purdue on Saturday with records of 6-0 overall and 3-0 in the Big Ten in large part because of the field-position advantage Taylor has provided.

Taylor has punted 40 times, with 12 going 50 yards or longer. Twenty of his punts have landed inside the opponents’ 20-yard line.

He was at his best in last Saturday's 23-20 win over Penn State. Six of his punts were downed inside the Nittany Lions’ 13-yard line, including three inside the 3.

“I think it’s amazing,” kicker Caleb Shudak said. “I’ve never been a punter, but if I tried to do something like that, I’m not going to be able to do it. It’s amazing how consistently he can do it.”

"That’s insane, first of all,” Przystup said in Lincoln, Nebraska. “That’s incredible from a punter’s standpoint. It seems he’s already at the NFL level while we’re all trying to strive to get there.”

The 24-year-old Taylor grew up in Australia and had never played American football until he joined the Hawkeyes for the 2020 season. He's become a fan favorite because of his personality and the way he's adapted to college football. It’s why fans at Kinnick Stadium were chanting “M-V-P” at Taylor after the win over Penn State.

“It’s obviously pretty exciting to give the specialists some love,” Taylor said. “I feel like everyone’s created an atmosphere where everyone is accepted, no matter what position you are. I know it’s different in some places. But I really appreciate everyone’s support since I’ve got here.”

Only three teams in the Bowl Subdivision have punted more than the Hawkeyes. Among the 15 teams with the most punts, only Iowa and Notre Dame have winning records.

Some of Taylor's best handiwork left Penn State starting possessions at its own 3, 1, 8 and 8 after starting quarterback Sean Clifford went out with an injury. With the Lions pinned deep, Iowa's fans were able to disrupt backup Ta'Quan Roberson's snap counts, and Penn State linemen were called for eight false starts.

“Starting with their (running) backs in the end zone, that’s the best feeling you can have as a defender,” safety Jack Koerner said.

Taylor said it was a challenge learning how to get punts to stop in the right spot.

“I owe a lot of credit to the guys on the punt unit, things like that,” he said. "They make my job easier.”

Taylor was the Big Ten punter of the year last season, averaging 44.1 yards per punt. He's averaging 46.6 yards this season, but he's been especially effective flipping the field in Iowa's favor.

Only once has an opponent scored after starting inside its 20 following a Taylor punt. That was Iowa State's 83-yard touchdown drive in the final minutes of Iowa’s 27-17 win on Sept. 11.

Iowa has scored 43 points on possessions tied to Taylor punts inside the 20. The Hawkeyes had a fumble return for a touchdown against Iowa State, a safety against Kent State and four touchdowns and three field goals on series after opponents had to punt.

Because of COVID-19 restrictions, Taylor has not been able to return home to Melbourne since coming to Iowa. Australia is 16 hours ahead of Iowa, but that doesn't stop his family from watching his games.

“They were lucky that the (Iowa State) game was on TV there," he said. "Otherwise they just watch the streams.”

Taylor is unable to benefit from the new name, image and likeness rules because he's an international student. Instead of collecting profits from his “Punting Is Winning” shirts — and another that reads “Oi! It's Taylor Time!” — proceeds go to Count The Kicks, an organization devoted to stillbirth prevention. It’s a charity coach Kirk Ferentz and his family have supported.

“They’ve made a big impact on my life since I’ve got here,” Taylor said.