QB Graham Mertz is creating 'buzz' this spring at Wisconsin 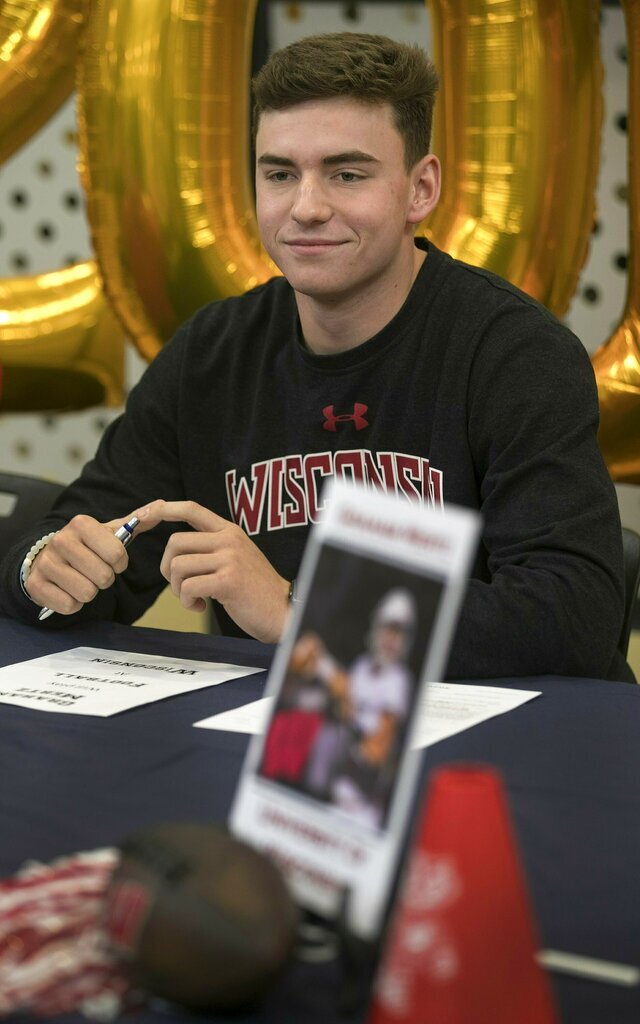 In this Dec. 19, 2019, photo, Graham Mertz acknowledges his intent to play at Wisconsin during a signing ceremony at Blue Valley North High School in Overland Park, Kan. Four scholarship quarterbacks are competing for the starter’s job at Wisconsin. When it comes to competing for fans’ attention, there’s no contest. Freshman Graham Mertz is the Badgers’ most hyped recruit in years. (Susan Pfannmuller/The Kansas City Star via AP)

MADISON, Wis. (AP) — Four scholarship quarterbacks are competing for the starter's job at Wisconsin. When it comes to competing for fans' attention, there's no contest.

Freshman Graham Mertz is the Badgers' most hyped recruit in years, having enrolled in January after setting a Kansas high school record for touchdown passes last season and being named MVP of the Army All-American Bowl.

"With a guy like Graham, you hear about it," said sophomore Danny Vanden Boom, who appeared in three games in 2018. "There is a buzz. And I understand why there's a buzz. He is very physically gifted."

Junior Jack Coan, redshirt freshman Chase Wolf, Mertz and Vanden Boom have been splitting repetitions during spring practice. The Badgers are coming off an 8-5 season that started with them ranked No. 4. They open at South Florida on Aug. 30.

Coan is the only quarterback with significant experience following the departure of three-year starter Alex Hornibrook, who went to Florida State as a graduate transfer.

Coan played five games last year, starting the last four when Hornibrook was out with a concussion, and passed for 515 yards on 60 percent accuracy with five touchdowns and three interceptions. He led the Badgers to a 35-3 win over Miami in the Pinstripe Bowl and has taken most of the snaps with the No. 1 offense this spring.

The 6-foot-3, 216-pound Coan has become more comfortable managing the team on the field. He said he wants to improve his film study skills this summer as well as becoming better physically. "Just getting bigger, stronger and faster, and improve on my throwing," he said.

Coan said he prepared as if he would be the starter each week last season because of Hornibrook's concussion problems.

Mertz threw for 3,866 yards and 51 touchdowns while leading Blue Valley North High to the Kansas Class 6A state final. In January, he passed for an All-American Bowl record 188 yards and five touchdowns to lead the East squad to victory.

Mertz is listed at the same height and weight as Coan and doesn't look or act like he should be finishing his senior year in high school. Mertz, who led a 14-play, 98-yard touchdown drive in a recent open practice, said he's not looking ahead to the fall when conversation about the starting quarterback's job is sure to heat up.

"We all know that competition gets the best out of us, so we couldn't ask for a better group of guys," Mertz said. "We love each other and we want to grow as a group, and we think that competition will bring us to the best level that we can be."

Mertz declined to give himself a letter grade when asked how he's performed in April.

"I've got room for improvement," he said. "I've got a lot of stuff to learn (and) I'm just trying to be a sponge right now and grow as much as possible."

The Wisconsin quarterback room would seem to be a positive environment for Mertz and the others to grow.

"I know a lot of people probably say this around the country but it's just a really, really tight group," Vanden Boom said. "There's nobody else I'd rather be working alongside."

Coan, who's played in 11 games over two seasons, said he's tried to help the younger quarterbacks with calls and signals on the sideline.

"I feel like working with other guys is a big thing," he said. "As you get older you build more chemistry with guys, and guys start looking at you more so you become a little more of a leader."