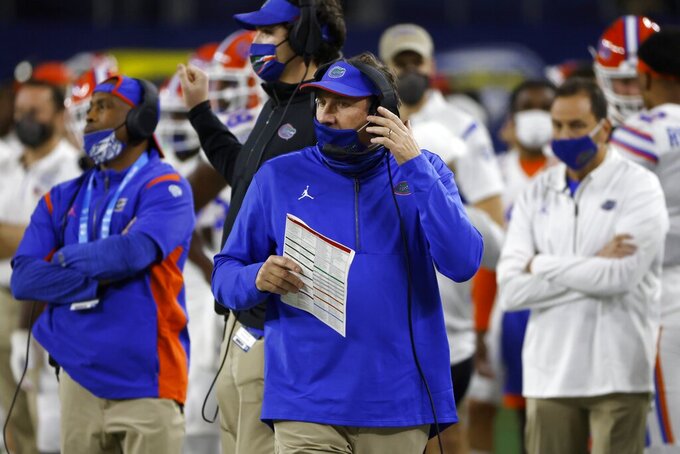 GAINESVILLE, Fla. (AP) — Florida coach Dan Mullen could be on the verge of opting out.

One week after insisting he hadn’t even thought about the NFL, there are reports that Mullen might walk away from the Gators, telling NFL teams he’s interested in making the jump to the pros.

It was tumultuous season for Mullen. He landed Florida on NCAA probation, was dealt a show-cause penalty for recruiting violations, was fined and reprimanded by the Southeastern Conference for his role in a benches-clearing fight, and was widely criticized for seemingly tone-deaf comments following two losses.

Mullen has acknowledged the landscape in college football is changing.

The burgeoning transfer portal forces coaches to continually re-recruit their own players and there are also the undetermined challenges regarding name, image and likeness earning potential. And the coronavirus pandemic exposed college athletics for having an overspending financial model that’s capable of crumbling on short notice.

“College football as we know it will be very different over the next several years,” Mullen said before last week’s Cotton Bowl. "I don’t want to say it’s going to be better, worse. It's just going to be different than what a lot of college football is used to. The world is ever-changing.

“I think that part of it, with everything changing in college football, it will be very different moving forward.”

While Mullen has had success, he has not publicly commented on reports of his desire to possibly leave.

The Gators are 29-9 since Mullen took over for fired coach Jim McElwain following the 2017 season. He signed a six-year, $36.6 million contract that made him the 10th-highest paid coach in college football in 2020. But Mullen hasn’t received a raise or an extension during his three years on the job, though athletic director Scott Stricklin made it clear he was working on an extension and raise for Mullen when COVID-19 essentially shut down Florida’s athletic department for months.

If Mullen were to land one of the six NFL openings — Atlanta, Detroit, Houston, Jacksonville, the Los Angeles Chargers and the New York Jets — it could leave Florida in a tough spot after he led the Gators to their first SEC Eastern Division title in four years.

The university would likely be hard-pressed to replace Mullen on short notice. It also seems to be in the best interest of Florida and Mullen for the coach to address the perception that he’s looking to leave Gainesville. Mullen already had one five-star recruit decommit following the Cotton Bowl and had another target commit to Clemson.

It is unclear if any NFL team has asked to interview Mullen after his roller-coaster season. While Florida set all sorts of offensive records thanks to Heisman Trophy finalist Kyle Trask, All-American tight end Kyle Pitts and dynamic receiver Kadarius Toney, Mullen did nothing to help fix a porous defense and ended the year with a three-game losing streak.

His bigger issues came off the field. He was chided for comments about wanting to “pack the Swamp” during a public health crisis. Then after losing to Oklahoma last week, Mullen praised the effort of his “scout team players” since the Gators were without three defensive starters and their top four receivers. Those comments were widely viewed as detracting from Oklahoma’s victory.

For Mullen, it was the latest in a list of cringeworthy moments in 2020.

The SEC reprimanded and fined Mullen $25,000 after league officials decided he did more to inflame than extinguish a tense situation against Missouri that led to a halftime brawl against Missouri.

Just before Christmas the NCAA announced Mullen had failed to “promote an atmosphere of compliance” for having impermissible contact with recruits. Those violations landed Florida on NCAA probation for the first time in 30 years.

Those missteps, and his comments about his future, give credence that Mullen is contemplating a move.

“As opportunities present themselves — like everything in the world — you take things as they come and you visit them and you reflect at where you are in your life,” Mullen said last week. "... You make a decision that’s best for you and your family in everything.”