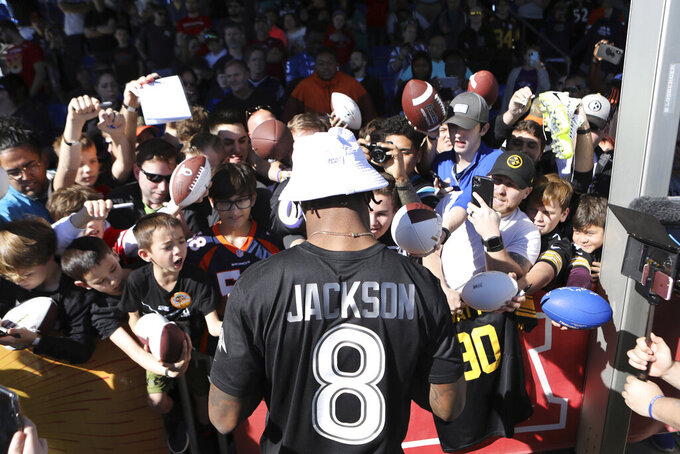 FILE - In this Jan. 25, 2020, file photo, AFC quarterback Lamar Jackson of the Baltimore Ravens signs autographs for fans during Pro Bowl NFL football practice in Kissimmee, Fla. Lamar Jackson announced he will hold his annual “Funday with LJ” event in Florida amid the state's spike in coronavirus cases. Jackson's third annual event will be held Saturday and Sunday in his hometown of Pompano Beach, Florida, according to a flyer shared on his Instagram page Monday, July 6, 2020. Social gatherings in groups of more than 10 people is currently not allowed in Pompano Beach, according to the city’s website.(AP Photo/Gregory Payan, File)

BALTIMORE (AP) — Baltimore Ravens quarterback Lamar Jackson has canceled his annual “Funday with LJ” event in Florida due to surging coronavirus cases in the state and strict gathering limits.

Jackson's third annual event was set to be held Saturday and Sunday in his hometown of Pompano Beach, Florida, but a spokesperson told news outlets Tuesday that the event was canceled.

Gatherings of more than 10 people are prohibited in Pompano Beach due to pandemic. Instead of allowing a few people to attend the event, Jackson decided to cancel it.

Jackson shared a flyer of the event on Instagram Monday, advertising flag football and water slides. It also said adults must wear face masks and waivers must be signed for children to participate.

The event was scheduled to start a week after Florida reported a single-day record of 11,445 cases.

On Tuesday, Florida confirmed 7,347 new cases, bringing the total since March 1 to 213,794. Another 63 people died, bringing the total to 3,943. The 45 deaths per day averaged over the last week is a 50% jump since three weeks ago. Statewide, 380 patients were reported as newly admitted to hospitals, a single-day record.