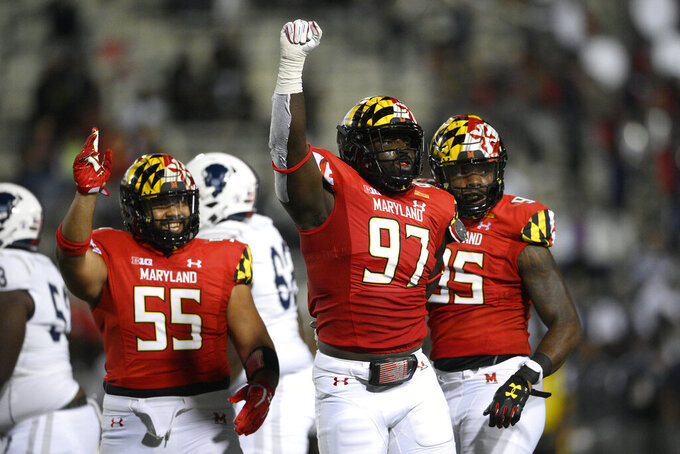 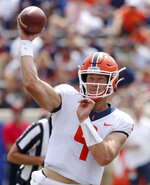 CHAMPAIGN, Ill. (AP) — After a season-opening win against Big Ten foe Nebraska, Illinois has lost two straight at the hands of UTSA and Virginia and is looking for a something to help right the ship.

Next up on Friday night is a tough, balanced Maryland team that has won its first two games.

First-year coach Bret Bielema said he has been addressing the problems.

“We had 90 yards in penalties and 45 of them came on three plays,” Bielema said. “We’re not going to be able to win very many football games that way. That definitely got addressed.”

Maryland opens conference play on the road after defeating Howard 62-0 and West Virginia 30-24. The Terrapins are getting votes in the AP Top 25.

Tagovailoa has thrown for 606 yards and six touchdowns in two games, many to his favorite receiving tandem of Dontay Demus Jr. and Rakim Jarrett. The two wideouts are tied for the team lead with 12 receptions apiece, with Demus topping all pass catchers with 261 receiving yards.

Tagovailoa completed 22 of 27 for 274 yards with three touchdowns against Howard and sat out most of the second half.

“As a team we’re excited to be 2-0,” coach Mike Locksley said. “It was great to see, with us being able to play a lot of players (vs. Howard), that the standard of playing with a high level of intensity — no matter what the score, no matter who the opponent — it was good to see that from our team.”

Bielema’s hopes come from starting quarterback Brandon Peters, who returns to the field for the first time since suffering an injury to his left (non-throwing) shoulder early in the Nebraska game.

“A lot of the things we saw (from Peters) during fall camp and even going back to last spring, through the summer, through fall camp, weren’t able to be materialized yet,” Bielema said. “He obviously has a very live arm, a lot of experience.”

Bielema was quick to praise backup Art Sitkowski’s job behind center following Peters’ injury, but said the decision to go with Peters was easy.

“I talked to Art and he was awesome about it,” Bielema said. “I told him if things were reversed and he was the starter coming back off an injury, we would do the same thing 100 out of 100 times. He gets that.”

With running back Mike Epstein injured, Illinois will rely on Chase Brown, Reggie Love III and Jakari Norwood to pick up the slack.

“This is the first time obviously for Maryland to go there to play — which completes us now having been to every team in the Big Ten, with an away game,” Locksley said. “It starts Big Ten play for us, which is another season for us, different than the out-of-conference games. It’s a Big Ten opener, national TV audience, so it will be the show.”

Despite the current rivalry, Locksley has some good memories of his time in Champaign.

“For me and my family, it's a special place. Raised my kids there. My two older sons both graduated from high school there, and the two younger ones call it home,” Locksley said. “We were able to do some exciting things there.”