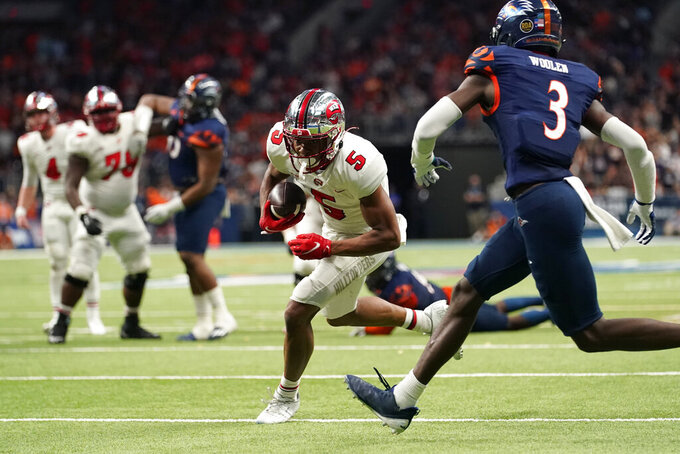 Western Kentucky wide receiver Mitchell Tinsley (5) runs past UTSA cornerback Tariq Woolen (3) for a touchdown after making a catch during the second half of an NCAA college football game for the Conference USA championship Friday, Dec. 3, 2021, in San Antonio. (AP Photo/Eric Gay) 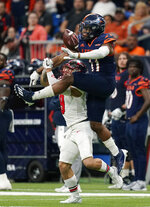 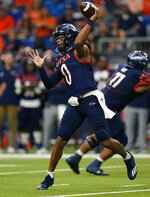 SAN ANTONIO (AP) — UTSA entered the season with a huge chip on its shoulder and the Roadrunners set it down Friday night to hoist the Conference USA trophy.

Sincere McCormick rushed for 204 yards and three touchdowns and the UTSA Roadrunners escaped another prolific outing by Western Kentucky quarterback Bailey Zappe to beat the Hilltoppers 49-41 and claim their first C-USA championship at the Alamodome.

After escaping with a 52-46 victory over Western Kentucky on Oct. 9, UTSA had to sweat through the final seconds again.

“He’s a very special player,” Western Kentucky coach Tyson Helton said. “I think he’s the best quarterback in college football. I say that over and over again. He’s an outstanding player and he did all he could do tonight along with the rest of the football team.”

UTSA had its most inspiring victory less than a week after its most humiliating outing in a 45-23 loss to North Texas last week.

Leading 49-41 with a minute remaining, the Roadrunners stopped the Hilltoppers at their own 6-yard line when Jahmal Sam intercepted a desperation throw by Zappe as time expired.

Roadrunners quarterback Frank Harris responded to one of his worst outings last week by completing 19 of 28 passes for 218 yards and two touchdowns against the Hilltoppers.

The third largest crowd in school history at 41,148 watched anxiously as UTSA struggled to maintain an early lead.

The Roadrunners held the Hilltoppers’ prolific offense to 289 yards and a touchdown in the first half.

“In the first half, we just didn’t execute,” Zappe said. “If we played like we played in the second half, the first half would have been a different game, but as we all know, that didn’t happen. It boils down to execution. I think a lot of that comes onto me, I’ve got to be better.”

Zappe could not be contained in the second half, though.

“That’s a tough guy back there at quarterback," UTSA safety Antonio Parks said. "That’s an NFL talent back there that can sling the ball around. We knew all week we would just have to get our offense on the field as much as possible.”

Zappe completed 20 of 34 passes for 274 yards and three touchdowns in the second half. He has 56 touchdowns this season, moving within four of matching the single season record set by LSU’s Joe Burrow during the Tigers’ national championship season in 2019.

UTSA safety Rashad Wisdom was disqualified for targeting with 5:18 remaining the third quarter after hitting Malachi Corley near the sideline on an incomplete pass. Losing their leading tackler and vocal leader was difficult to overcome.

Zappe led Western Kentucky to 21 straight points after Wisdom’s ejection to cut UTSA’s lead to 42-34 with 11 minutes remaining in the game.

“It’s not over until the last second’s over and our guys all know,” Traylor said. “We told them we’re going to score, keep scoring.”

The Roadrunners responded with a 10-play, 75-yard drive capped by a 28-yard pass by Harris to De’Corian Clark in the back right corner of the end zone.

Zappe and Harris also exchanged scores to open the game.

Zappe tossed a 60-yard touchdown to Mitchell Tinsley 56 seconds into the game. Harris responded a little more than two minutes later with a 24-yard scoring run to cap a 75-yard drive.

The Roadrunners scored touchdowns on their first four possessions in building a 28-13 lead at the half.

“They were very unpredictable,” Hilltoppers safety Antwon Kincade said. “They gave us different kind of sets. We’ve seen it before, but they were in a whole lot of different variations out there in their formations. They came ready, they came with a plan.”

McCormick finished with 36 carries and had a rushing touchdown in each of the first three quarters, scoring from 2 yards, 65 yards and 17 yards.