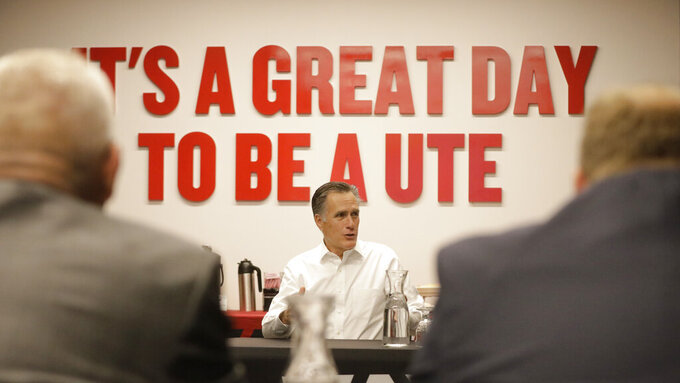 Utah Sen. Mitt Romney speaks with athletic directors from Utah colleges during a meeting at the University of Utah Friday, Nov. 15, 2019, in Salt Lake City. Romney says he supports efforts to allow college athletes to profit from their name and image because he wants to help poor students who may never become professional athletes. (AP Photo/Rick Bowmer)

SALT LAKE CITY (AP) — Utah Sen. Mitt Romney said Friday his support for allowing college athletes to profit from their name and image isn’t driven by a desire to help a star quarterback score endorsement deals, but to help poor athletes get extra money to help their families.

“We have in many cases young people who are giving their heart out day-after-day in practice, sometimes six days a week, six hours a day with the expectation of going pro and there ain’t a chance of them actually going pro,” Romney said at a news conference after a meeting with Utah college athletic directors.

Romney, who was president and CEO of the 2002 Winter Olympics in Salt Lake City, said he learned at the meeting there are more options than he thought, and pitfalls that need to be carefully maneuvered. He said wants to make sure rules prevent certain colleges from becoming “super magnets” and doesn’t want athletes to be defined as employees of universities, which could trigger problems with employment laws.

He said California’s first-in-the-nation law, signed in September, which allows college athletes to profit from their name and image by 2023 is forcing every state to consider action and might compel Congress to get involved. Several states including Michigan and Wisconsin are weighing similar measures.

The NCAA, pressured by states’ actions, took a major step toward allowing athletes to make money off their fame last month by voting to allow amateur athletes to "benefit' on their name, image and likeness "in a manner consistent with the collegiate model." It clears the way for the NCAA's three divisions to draw up new rules by January 2021.

“California has lit the fuse,” Romney said. “If Utah is going to be sending athletes to compete with California schools and California kids are compensated and the Utah kids aren’t, why, that would not necessarily make a level playing field.”

Proponents say players are the driving force that earn billions in revenue for the NCAA, universities and colleges.

University of Utah Athletic Director Mark Harlan said he is open to thoughtfully and creatively exploring ways to increase compensation for student-athletes; perhaps through a law passed by Congress that would avoid an “unlevel” playing field where it’s only allowed in certain states.

“That is something that is not real tolerable when we are in the spirit of competition,” Harlan said. “Having standardized rules is certainly the starting point.”

An initial analysis found that a handful of the school’s 545 student-athletes could make about $10,000 from their name and image, Harlan said. University of Utah athletes currently get $1,500 a month in cash if they live off campus, Harlan said.

The university has the highest athletic profile in the state. Its football team is currently seventh in the College Football Playoff rankings, and star quarterback Tyler Huntley was named a finalist on Friday for a prestigious national award.

Brigham Young University Athletic Director Tom Holmoe said a solution must be found because the current system doesn’t work. He predicts the array of alternatives will be narrowed down soon.

“I am concerned about how our kids are able to compete on a national level,” Holmoe said.