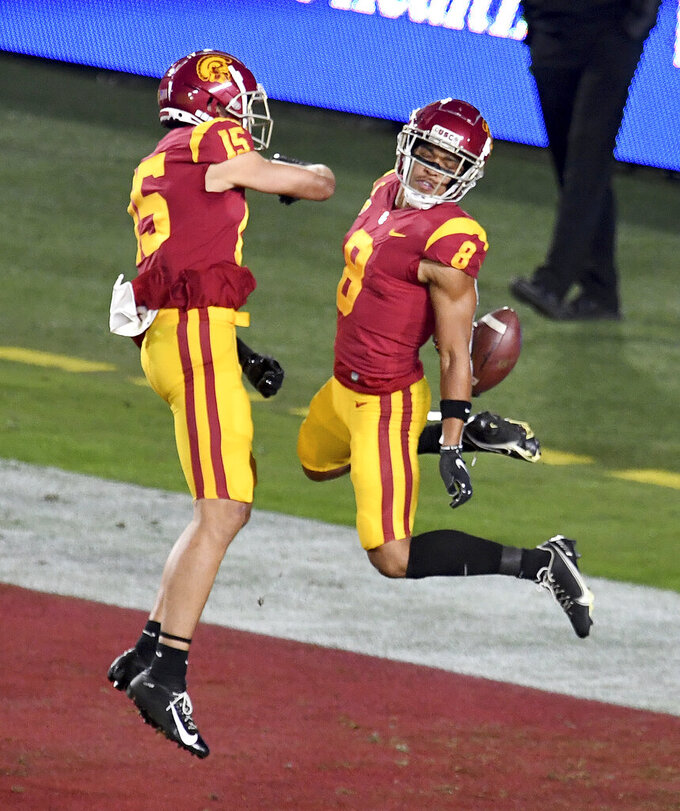 Southern California wide receiver Amon-Ra St. Brown (8) reacts after catching a pass in the end zone for a touchdown down against Washington State in the first half of an NCAA college football game in Los Angeles, Sunday, Dec. 6, 2020. (Keith Birmingham/The Orange County Register via AP) 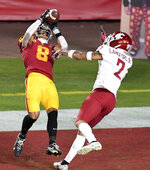 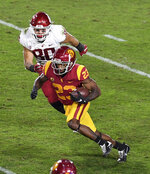 LOS ANGELES (AP) — Kedon Slovis and Amon-Ra St. Brown kept grinding in practice while No. 16 Southern California waited two weeks and then two more days to get back on the field.

When the Trojans and Washington State finally got the green light Sunday night, Slovis and St. Brown roared right through it for a record-setting start to a blowout win.

St. Brown caught four touchdown passes from Slovis in a spectacular first quarter, and unbeaten USC cruised to a 38-13 victory over the Cougars.

Slovis threw five touchdown passes in the first half before finishing with 287 yards as the Trojans (4-0) returned from a prolonged absence caused by a COVID-19 outbreak with a dominant performance on both sides of the ball against the Cougars (1-2), who also hadn't played since Nov. 14.

St. Brown made college football history with touchdowns on every one of his four catches in the opening quarter, including two dazzling grabs made with backward dives on difficult throws by Slovis. Along with tying Robert Woods’ USC record for TD catches in a game, the junior receiver tied the FBS record for touchdowns scored in any quarter and joined Duke’s Corey Thomas in 1997 as the only players in FBS history with four touchdown catches in a quarter.

“We don’t like being away from football for so long, but I think the days away helped us get our legs back underneath us,” St. Brown said. “We had some linemen out, but we had a lot of time to get our throws in. It wasn’t too bad for (the skill-position players).”

With precise execution and big-play excellence against a depleted Washington State secondary curiously playing man-to-man coverage against one of the best receiver groups in the country, the Trojans grabbed a 35-0 lead midway through the second quarter with just 214 yards of offense.

Talanoa Hufanga and Olaijah Griffin had interceptions in the first half for USC, which dominated a game moved back two nights to allow the Trojans to clear enough players from coronavirus protocol to play.

Slovis recaptured the accuracy that characterized his impressive freshman year, and the sophomore’s throws also had the tight spirals that were missing earlier this season in his shaky start.

“Offensively, I felt like we had a lot to prove in this game,” said Slovis, who completed 18 straight passes into the third quarter. “Across the board, everyone was doing their job and playing excited, especially in that first half.”

Freshman Jayden De Laura passed for 134 yards, threw two interceptions and lost a fumble for the Cougars. They were shaky in the first half after their layoff, although coach Nick Rolovich said he didn't blame it on rust.

“I don’t know how much was our lack of execution without seeing the film,” Rolovich said. “But, I mean, it’s pretty easy to use that as a good example of how not to start a game versus a good football team. Pregame, I wasn’t sure if it was the quiet before the storm or if there was some intimidation.”

Washington State’s secondary was missing four of its eight regular rotational players — and it showed, although not much could have been done to stop most of St. Brown’s impressive scoring catches.

“Two weeks definitely (stinks) not playing, and you’ve got to be excited to play after two weeks, though,” right tackle Abraham Lucas said. "Some people are, and some people are lackadaisical towards it, and that’s something that has to change. We’re here to play football, and if you’re not excited to play after two weeks not playing in a season when you have limited opportunities regardless, what are you doing?”

Slovis hit St. Brown for TD catches of 7 and 22 yards on the Trojans’ opening two drives. USC's interceptions — including Hufanga's pick of a deflected pass and an incredible hurdle of a would-be tackler on his 37-yard return to the Cougars 4 — then led to two more short TD catches for St. Brown.

De Laura was inconsistent in his third career game, and he was replaced in the fourth by Gunner Cruz and Cammon Cooper for their Washington State debuts. Cruz threw his first touchdown pass to Renard Bell, who had a career-high 11 catches.

The Trojans got no immediate benefit from their blowout win because the AP Top 25 was selected earlier Sunday, but they could make a significant leap up the rankings next weekend if they can knock off UCLA in similarly impressive fashion.

Washington State: The Cougars aren't deep enough to overcome their defensive absences against a team as talented as the Trojans. That's about the only definitive notion to take from a game that should probably be forgotten.

USC: After improving each week in this bizarre season, the Trojans are one win away from a berth in the Pac-12 title game for a shot at the Fiesta Bowl. There's no telling what this much talent could have done in a full year, but the Trojans are doing what they can.

USC: At the Rose Bowl for the Victory Bell on Saturday in the Los Angeles rivals' 90th crosstown showdown.