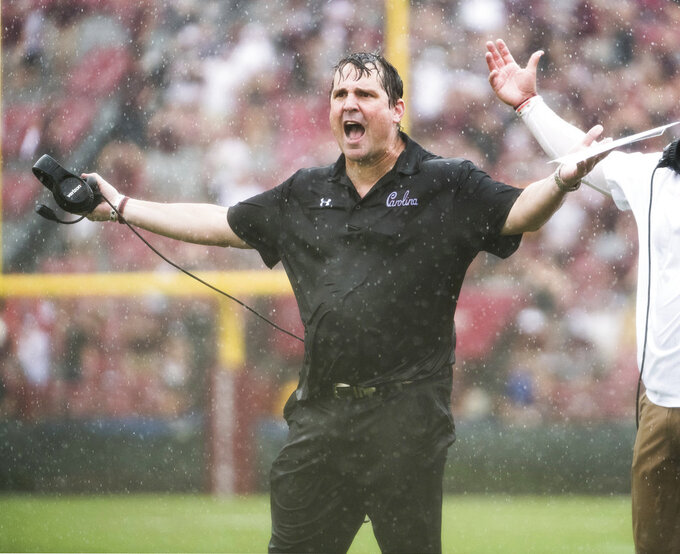 FILE - In this Oct. 6, 2018, file photo, South Carolina head coach Will Muschamp reacta to an official's call during the second half of an NCAA college football game against Missouri, in Columbia, S.C. Back from a week off, South Carolina faces Tennessee on Saturday, Oct. 27. (AP Photo/Sean Rayford, File)

COLUMBIA, S.C. (AP) — The first half of the season has not gone the way South Carolina had expected. The Gamecocks believe there's still plenty of time left to turn things back in the winning direction.

"We're not where we want to be. We know that we can improve," defensive end Bryson Allen-Williams said Tuesday. "The mistakes we've been making have been on us."

Those mistakes have cost South Carolina (3-3, 2-3 Southeastern Conference) against ranked opponents, including Georgia, Kentucky and, last time out, Texas A&M. A week off, Allen-Williams said, gave the Gamecocks time to clear their heads and get focused on finishing the season strong.

"It's got to be on us to go out there and make plays that change the game," he said.

"We've just got to understand that we've got to be smarter, tougher football players and understand we can't make simple mistakes and beat good teams," he said.

Those mistakes have cost the Gamecocks the first six games. Eight of their 12 turnovers in SEC play have occurred in South Carolina's three league losses. Ball security, quarterback Jake Bentley said, was a focus on the bye week along with building the cohesion with receivers to prevent the rash of dropped balls in those defeats.

"We're doing a lot of stuff to get more productive offensively," he said.

Bentley accepts that his inconsistent play is among the offensive problems. A trendy pick by analysts for a high-round NFL draft selection when the year began, Bentley has struggled at times in South Carolina's biggest games.

In South Carolina last game against the Aggies on Oct. 13, Bentley had only 46 yards passing at halftime and threw a bad interception near the end zone in the first half as the Gamecocks fell behind 16-0.

After the break, Bentley looked like a different player as he threw for three touchdowns — including a pair of two-point conversion passes — in South Carolina's rally.

Those big swings cannot continue, Bentley said, if the Gamecocks hope to play well down the stretch.

In all, three of Bentley's interceptions have come in the end zone.

"That's something we cannot have," Gamecocks coach Will Muschamp said.

Bentley, a junior, has been a popular focal point for Gamecock critics, who point to the play of Michael Scarnecchia in a 37-35 win over Missouri earlier this month while Bentley was sidelined with a knee injury.

Bentley has stayed off social media and does not want to engage the naysayers. He acknowledges his confidence has wavered the past few weeks, although Bentley said he's been picked up by teammates continually telling him to keep his head up.

"It's not all on Jake," said Allen-Williams, the Gamecocks lineman. "There are 11 guys out there who've got to make plays."

Tennessee coach Jeremy Pruitt said his defense will have to make things tough for Bentley early. "If you let him sit there and stand in the pocket, he can deliver to some really good players," Pruitt said.

Muschamp, too, backs his starting quarterback. He counsels him often to brush off the harsh words and know that if he continues working hard, things will turn in his favor.

"We know where we're headed," Muschamp said. "But at the end of the day, we're not where we want to be."

The Gamecocks defense will get a boost from the return of end D.J. Wonnum, who led the team a year ago with six sacks. He's been out with an ankle injury suffered opening week against Coastal Carolina.

South Carolina has played better after the break in Muschamp's first two seasons, going 8-5 in games following the week off.

Linebacker T.J. Brunson, the team's top tackler, thinks a week to hone in on past mistakes and reaffirm team goals goes a long way to turning negatives into positives.

"It's something we've seen before," he said. "I think we can see it again."