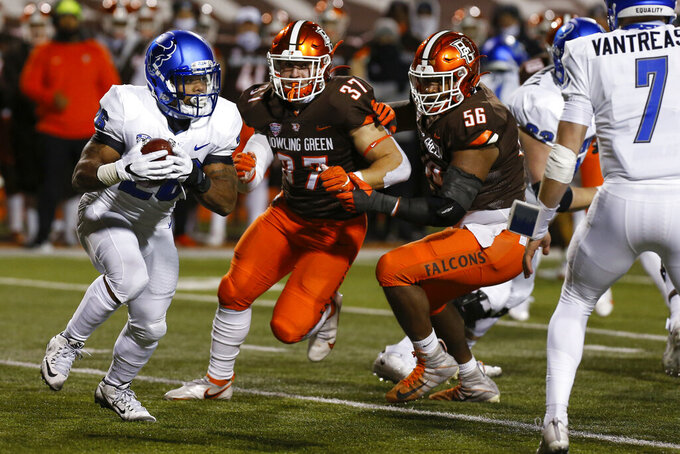 Playing a bit under the radar at Buffalo, Jaret Patterson has put up rushing numbers that demand attention.

Patterson broke his own school record with 301 yards and four touchdowns in a 42-17 win at Bowling Green in the third of his team's three straight mid-week Mid-American Conference games.

Granted, the first 300-yard rushing game in the nation came against the worst run defense in the Football Bowl Subdivision, but Patterson has produced consistently against almost everybody.

The 5-foot-9, 195-pound Patterson has run for at least 100 yards in 13 of his 30 games. His 3,323 yards make him the second-leading career rusher among juniors, behind Oklahoma State's Chuba Hubbard.

Patterson is averaging 170.3 yards through three games and 7.2 yards per carry.

Monday's interception return came against Tennessee. He joined Texas State's Jarron Morris as the only players with 100-yard pick-sixes this season.

Pittsburgh's DJ Turner and Purdue's Rondale Moore each had 15 catches, tied for second-most in a game behind Tyler Snead's 16 receptions for East Carolina against Tulsa on Oct. 30.

Turner, a senior who transferred from Maryland, finished with 184 yards and a touchdown against Virginia Tech while falling one catch short of the Pitt record set by Harry Orszulak in 1968. In case you were wondering, Larry Fitzgerald, the greatest Pitt receiver of all time, never had more than 12 in a game.

Moore, who changed his mind about opting out this season, made his long-awaited return from injury and had 116 yards on his career-high 15 catches against Minnesota. It was the ninth time in his 18 career games he had double-digit receptions. Moore also ran three times for 20 yards and a touchdown.

Northwestern continues to put up impressive defensive numbers. The 17-7 win over then-No. 10 Wisconsin marked the first time the 11th-ranked Wildcats held a Top 10 opponent to seven points or fewer in 53 years.

They're holding opponents to just 12.6 points, third-best among teams that have played at least five games, and they've shut out four of their five opponents in the second half.

Wisconsin came into the game having put up 45 and 49 points in its first two games, respectively. The Badgers' touchdown came on a 49-yard pass. No other drive penetrated deeper than the Northwestern 23. Especially impressive was that the Wildcats' defense was on the field for 37 minutes and 82 plays.

Indiana netted minus-1 yards on 16 rushes against Ohio State, a nice statistic for the Buckeyes on paper but a bit hollow because the Hoosiers were playing from behind most of the game and had all but abandoned the run.

Still, no Big Ten opponent had netted zero or negative yards on the ground against Ohio State since Northwestern ran 33 times for no yards in 2007.

Indiana's 16 rushing attempts were its fewest in at least 20 years. The stat sheet showed the Hoosiers ran four times in the second half, but one was a sack.