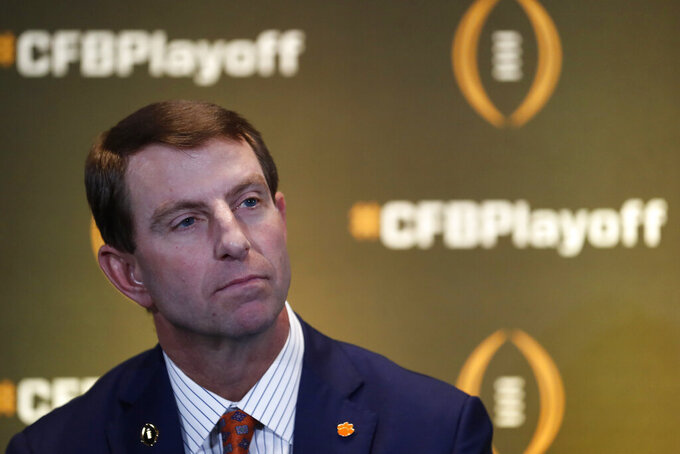 SCOTTSDALE, Ariz. (AP) — Braden Galloway, one of three Clemson players suspended by the NCAA right before last year's College Football Playoff, is set to make his season debut for the third-ranked Tigers against No. 2 Ohio State in the Fiesta Bowl on Saturday.

Galloway, defensive tackle Dexter Lawrence and offensive tackle Zach Giella tested positive for ostarine, a supplement banned by the NCAA that can aid muscle growth. The suspension was for a calendar year.

All three players have said they did not know how the substance showed up in their tests and they did not intentionally take anything. Clemson investigated and said it never found the source of the supplement.

Lawrence skipped his last year of eligibility and became a first-round NFL draft pick. Giella left the program. Galloway, a sophomore from South Carolina, spent most of this season working with the Clemson scout team.

“It was just about having the right mindset, knowing I can't be there Saturdays. There were was some tough days,” Galloway said earlier this week. “You just try to find something you can get better at every day.”

Galloway said he has done several NCAA-required drug tests since last year and had some done on his own to make sure he stayed clean.

Galloway have five catches and touchdown last season as a freshman and was expected to be a big contributor at tight end this season. The suspension would have followed him had he decided to leave Clemson, but he said he never considered transferring.

“I trust and believe in Clemson and their plan,” Galloway said. “I feel like we handled it the best we could.”

The first call Jonah Jackson received after he made it known that he planned to leave Rutgers as a graduate transfer was from an unfamiliar caller with a 614 number — the Columbus, Ohio, area code.

Jackson, a guard, acknowledged he had some doubts about how he would fit in at the Big Ten's best program after starting for the Big Ten's worst team. Ohio State was replacing four offensive line starters and needed a veteran to at the very least provide some depth.

“I definitely felt the need to be almost perfect in my game and constantly evolve what I'm doing to be able to be the best player I can possibly be,” Jackson said.

“Jonah was just the perfect guy at the right time for that room,” Ohio State coach Ryan Day said. “He's come in with a professionalism.

“I think our offensive line this year has come together stronger than an offensive line has had in a long time that I've seen. He's been a big part of that, even in the short time here.”

Jackson said in many ways things weren't so different at Rutgers and Ohio State. He played under coach Chris Ash, who was defensive coordinator at Ohio State before taking over at Rutgers.

“We were structured basically the exact same. So when I came here it wasn't too much of a difference,” Jackson said. “The only thing was the different level of expectation.”

Jackson was not a player Ohio State was interested in coming out of high school near Philadelphia. He said Rutgers was his only FBS scholarship offer.

“If you would have told me I'd be in this position a year ago, I'd probably laugh at you,” Jackson said.

The College Football Playoff schedule is weird this season and the Fiesta Bowl coaches would prefer more consistency in the scheduling.

The semifinals are being played on Dec. 28, the earliest they have been played in the six-year-old system, and only three weeks after conference title games. With the national championship game on Jan. 13, the 15-day break after the semifinals is the longest scheduled for any College Football Playoff, which has dates set through the 2025 season.

How did this happen? Long story short, the original plan was to play the semifinals on New Year's Eve two out of every three years and Jan. 1 the other years. That was a bad plan so it was changed so the semifinals would be played mostly on Saturdays or Jan. 1.

This year the teams arrived at their sites on Dec. 22.

“I would much prefer it to be on Jan. 1 and just have consistency in that,” Clemson coach Dabo Swinney said. “And I've done that. I think we played on the First one year. Maybe it was the 31st. I can't remember which one it was. But I personally like being able to be home for Christmas and head out on the 26th and have your bowl prep. That's, to me, preferable.”

“This has been a unique preparation, but it's been the same for both teams. And I do think coming off of a long season, coming off of the championship game, it was a challenge to get our guys rested enough and then prepared to play this bowl game,” Day said. “It is kind of over my pay grade in terms of making decisions on this. But I would say that playing the game on Jan. 1 would be nice just to keep a tradition going.”