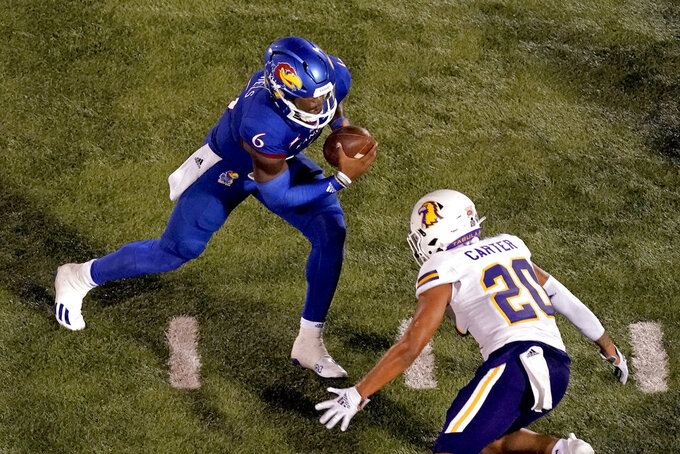 Some things to watch on the second Saturday of the Big 12 Conference season:

Texas vs. No. 1 Alabama. The future SEC foes meet for the first time since the BCS national championship game at the end of the 2009 season, when the Crimson Tide won the first of their six national titles under coach Nick Saban. Texas hasn't won a Big 12 title since, and is 6-7 under Steve Sarkisian after winning the opener of his second season. Sarkisian was Saban's offensive coordinator for two seasons before that. Alabama will be only the third No. 1 team to visit Austin — Ohio State won there in 2006, and the Longhorns beat SMU in 1950. The Crimson Tide last played in Austin 100 years ago, the last regular-season meeting in the series.

Kansas vs. West Virginia, in the first game this season that counts in the Big 12 standings. The Mountaineers got bowl eligible with a 34-28 win over Kansas in last year's regular-season finale. Kansas opened this season with 297 yards rushing (9.9 per carry) and five different players rushing for a touchdown. West Virginia limited Pittsburgh to 76 yards rushing, that total bolstered by five sacks for minus-39 yards.

Iowa State goes to Iowa having lost the last six games in the Cy-Hawk Series. That is the Cyclones' longest drought in the instate rivalry since the Hawkeyes won 15 in a row from 1983-97. ... No. 11 Oklahoma State, hosting Arizona State, will be going for its 10th consecutive home win. That would match the longest in school history. ... TCU has won 19 of its last 20 home openers since a 27-24 overtime loss to FCS team Northwestern State in 2001 in Gary Patterson’s first home game as head coach. The Frogs play their first home game for Sonny Dykes against Tarleton, which is making the transition from NCAA Division II to FCS.

Oklahoma State quarterback Spencer Sanders had an FBS-best 463 total yards of offense and accounted for six TDs in the season opener. He became only the second player in Big 12 history with 300 passing yards, three passing TDs and two rushing TDs in a half. The other was Patrick Mahomes in 2006.

There are two games Saturday against future Big 12 teams that are ranked, plus the renewal of a border-state rivalry when Kansas State hosts a former Big 12 foe.

Ninth-ranked Baylor is at No. 21 BYU; and Texas Tech hosts No. 25 Houston. BYU and Houston join the Big 12 next season with Cincinnati and UCF. BYU lost 38-24 at Baylor last October in the first game matching a Big 12 team against one of the incoming teams. Texas Tech won its 2021 opener in Houston, but that was the weekend before those four schools got invitations to joint the Big 12.

The 98th meeting between K-State and Missouri will be the first since 2011, the last season before the Tigers left the Big 12 for the SEC. The Wildcats won the last meeting, but Missouri has a 59-33-5 series lead.