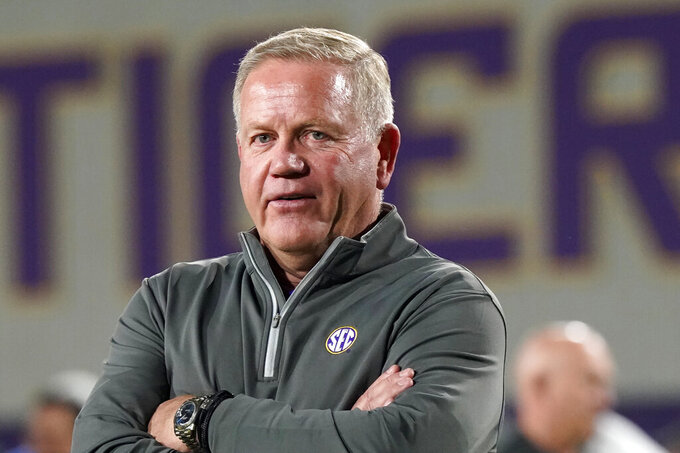 Southern California's Lincoln Riley and LSU’s Brian Kelly went to the transfer portal looking for star power as they attempt quick rebuilds at their new schools.

Nebraska’s Scott Frost, meanwhile, is counting on the portal to help him save his job.

“I just looked at it like you would in the NFL," Kiffin said in an interview with The Associated Press. "Sometimes there are years you need to go sign more free agents than you do other years based off what you have and your needs. That part excites me about it, that you can fix problems fast."

Kiffin is trying to build off a 10-win season that ended in the Sugar Bowl. His group of 17 transfers is ranked as the No. 2 portal class in the nation, according to 247Sports, and is headed by quarterback Jaxson Dart — last season's starter at USC.

Dart left the Trojans a week after Riley's starter at Oklahoma, Caleb Williams, announced he would join his coach in Los Angeles. Williams and Biletnikoff Award-winning receiver Jordan Addison from Pittsburgh are the biggest names Riley landed in his portal class of 20 that's ranked No. 1.

USC won just four games last season, the fewest since 1991, but the addition of so much talent has earned the Trojans a No. 14 preseason ranking and made them a contender to win the Pac-12.

“The people we brought in here, the staff we brought in here, we didn’t come here to play for second. We are not wired that way,” Riley said. “We came here competitively to win championships, win them now and to win them for a long time. That will always be our expectation.”

Kelly's charge at LSU is to revive a program that dropped off significantly since winning the national championship in 2019 under Ed Orgeron.

Kelly's group of 15 portal additions is ranked No. 3 and especially strong on the defensive side. The transfers of Arkansas three-year starting defensive backs Joe Foucha and Greg Brooks to LSU illustrate how cutthroat the game can be. Kelly acknowledges bringing in players from an SEC West rival isn't ideal. On the other hand, two LSU players transferred to the Razorbacks.

“I know many don’t like to see that happen within the league. I’m not crazy about it, either,” Kelly said. "But these are two Louisiana kids that wanted to play at LSU, and they have been great additions. I would say that when we were looking into the transfer portal, we wanted young men that had SEC experience and had ties to the state of Louisiana. Brooks and Foucha fit that to the T.”

Nebraska's Frost, 15-29 in four years, desperately needs a turnaround after taking a $1 million pay cut and firing four offensive assistants near the end of a 3-9 season.

His 15 portal additions are ranked No. 7, and seven or eight probably will start in the opener. The biggest names are defensive end Ochaun Mathis (TCU) and quarterback Casey Thompson (Texas).

Frost said the number of transfers he'll pursue will vary from year to year and that 15 probably is on the high end.

No matter how many players are added, Frost said, there always is a concern about how transfers blend with returning players. So far, he's been pleased with the chemistry, and a trip to Ireland to play Northwestern on Saturday provides another opportunity for bonding.

“I couldn’t be happier with that piece and the meshing of these parts," Frost said. “We haven’t hit any adversity yet, and I think the first test of that will be when we hit some adversity.”

Kiffin said he sees the portal evolving from being a way to add complementary pieces to a team to becoming the primary recruiting tool for some schools.

Kiffin likes to compare the portal and high school recruiting with NFL free agency and the draft. Pro teams frequently misjudge draft prospects because those players have never competed against NFL talent, Kiffin said, whereas a free agent with five years of experience is a known quantity.

“You’re going to miss on a number of high school kids because you're just watching high school film,” Kiffin said. "What’s the talent level where they’re at? And they’re 16, 17 years old?

“These (transfer) guys, you’re not going to miss on as much because you’re getting to watch them play Division I football, getting to talk to people that have coached them. And so the margin of error is less.”