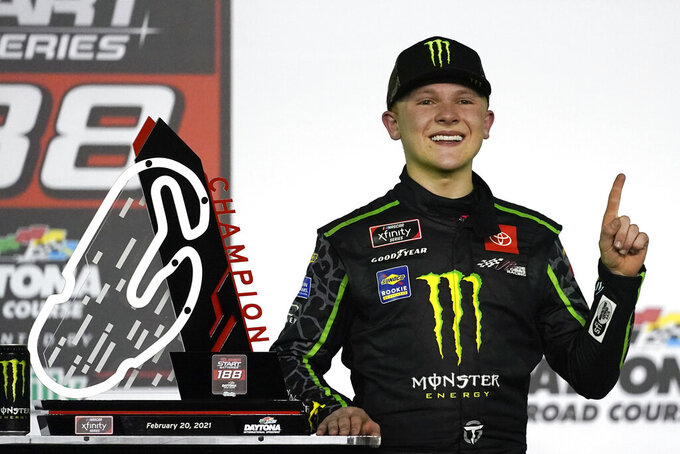 CHARLOTTE, N.C. (AP) — Ty Gibbs understands why some struggle to grasp how an 18-year-old without a single minute of experience at NASCAR's national level just won his very first race.

He'd never driven an Xfinity Series car before, never participated in a live pit stop, and then without any practice or qualifying, Gibbs beat reigning series champion Austin Cindric on the road course at Daytona International Speedway.

“You know what Pop Warner football is, right?” said the grandson of three-time Super Bowl winning coach Joe Gibbs. “It's like taking a quarterback from the Pop Warner Football League and putting him in a college football game, a big bowl game, and you're not allowed to stretch. You're going in there cold, you might pull a muscle, but you're firing off into the game.”

OK, so that's what it felt like to Gibbs. But a Pop Warner quarterback is unlikely to lead a college football team to a bowl game victory, much the same way a rookie isn't supposed to beat 39 other drivers who all had far more experience than Gibbs.

Gibbs had never even heard the engine in his Toyota until he turned it on moments before last month's race. He'd never used a switch panel like the one inside the Xfinity car, was unfamiliar with the dashboard and even the placement of the window was a new thing.

Gibbs credits the successful debut to visualization techniques he's relied on in his short racing career. He'd only run two full seasons at lower levels of competition before this year but won seven of his 23 outings.

“What I really enjoy is when I can see it in my brain, when I can envision what I am doing, I know I can put myself in there and do it,” Gibbs said. “I feel like that's one of the skills that I've been blessed with and one of the tools that's helped me. Like a golf swing, if I feel like I can do it with my eyes closed, I feel like I can just out the same thing to a race car.”

Although his grandfather gives him top equipment from Joe Gibbs Racing to drive, Gibbs' career is largely steered by his father. It was Coy Gibbs who bumped his son up two levels of competition — Ty Gibbs skipped the Truck Series completely and went straight to Xfinity — and mapped out his 2021 season.

Ty Gibbs will run a full ARCA schedule again this year and pursue a championship but now that he's the legal age to compete at NASCAR's national level, he will also dabble in the Xfinity Series to gain experience for a potential full-time 2022 move.

Three days after his Daytona victory, JGR announced 14 additional Xfinity races for Ty Gibbs this year beginning Saturday at Phoenix Raceway. It will be double duty for Gibbs, who will run Friday night in the ARCA Series race.

Cindric, who had a gaping hole in his car from an early accident at Daytona, pushed Gibbs hard around the road course to force the rookie into a mistake. Because of the damage on Cindric's car, he knew he'd lose his shot at winning the race if Gibbs got to the lead.

“I put him in some really tough spots trying to hang onto the lead... so he handled everything really well and was in a position on those restarts and made some decisions and won the race because of it,” Cindric said. “I feel like he’s showcased that he has the pace and he has the talent and it’s for everyone else to observe and for him to decide how the next couple races are going to go.”

The Toyota from his grandfather's team will be among the best in the field at Phoenix — “he’ll obviously have capable equipment,” Cindric noted — but Gibbs isn't concerned about pressure for a repeat performance.

“There's no reason to stress myself out. I don't have any expectations ever set for myself," Gibbs said. “I feel like the same attitude and mental mindset going into every race and that's to get the best finish I can and the most experience for myself so I can be the best racecar driver I can possibly be in the future.”