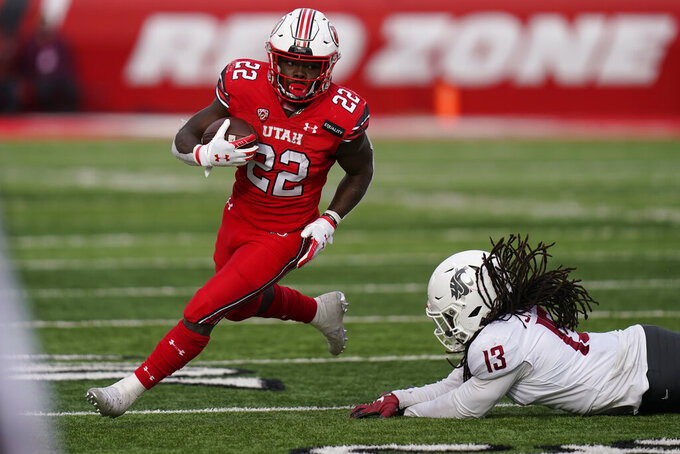 FILE - In this Dec. 19, 2020, file photo, Utah running back Ty Jordan (22) runs for a score as he eludes a tackle by Washington State linebacker Jahad Woods (13) during the second half of an NCAA college football game in Salt Lake City. This was supposed to be Jordan’s time. Instead, Utah approaches a new football season facing the unexpected and unwanted challenge of replacing Jordan in the backfield. Jordan died at 19 after an accidental shooting on Dec. 26. (AP Photo/Rick Bowmer, File)

SALT LAKE CITY (AP) — This was supposed to be Ty Jordan’s time. Instead, Utah approaches a new football season facing the unexpected and unwanted challenge of replacing Jordan in the backfield.

The Utes entered their preseason camp this week with four players battling to be the new lead running back. This wasn’t supposed to happen.

Then a tragedy changed everything. Jordan died at the age of 19 in December in what police have concluded was an accidental shooting.

“We all miss him tremendously and we think about him all the time,” coach Kyle Whittingham said. “We’ve got several things on tap to honor him this season. A scholarship in his name. Some in-game things that we’re going to do.”

Honoring Jordan’s memory and continuing his legacy drives each running back actively competing to rise to the top of the depth chart.

“He’s the standard,” sophomore Chris Curry said. “The gold standard. So, we try to model everything on what he’s done and live up to his standard of what he did here.”

Jordan’s influence still permeates the team and goes beyond the special decals players had on their helmets during Utah’s spring game. Former teammates have felt driven to dedicate the upcoming season to him and push themselves a little bit harder in each practice for his sake.

Micah Bernard still remembers a conversation last season where Jordan told him that Bernard was going to be great. That moment has stuck with him all offseason and motivated Bernard to prove Jordan right.

“He turned on a light for me. He really did. This is for him, man,” Bernard said.

Bernard, Curry, T.J. Pledger and Tavion Thomas are in the mix to succeed Jordan. All four players are capable of breaking out and becoming the next star rusher for the Utes.

The competition could carry into the season opener against Weber State on Sept. 2. They are embracing the challenge of creating separation for themselves at a deep position group.

“It’s nothing foreign to me,” Pledger said. “Being able to be around talented guys at this point does nothing but push me and motivate me to keep going harder. It’s just all part of the process.”

Pledger, a junior transfer from Oklahoma, has the most playing experience. He’s a speedy back who tallied 451 yards and five touchdowns on 95 carries for the Sooners last season. Curry, an LSU transfer, and Thomas are both prototypical power backs with physical attributes mirroring those of past Utes stars like Zack Moss and Devontae Booker. Bernard has good hands and is a threat as both a runner and pass-catcher.

Bernard is the lone member of the quartet to have played for the Utes last season. He tallied 76 rushing yards behind Jordan while averaging 5.1 yards per carry.

“All four of them bring something different to the table,” Whittingham said. “Right now, it’s equal reps and we’ll see how it plays out."

Recent history suggests Utah will find a running back capable of shouldering a heavy load on offense. Seven different players have combined to produce 11 1,000-yard rushing seasons during Whittingham’s tenure. Moss crossed the 1,000-yard mark for three straight seasons from 2017 to 2019 on his way to accumulating a school-record 4,067 career rushing yards.

“The goal is to be the top guy and rush for a thousand yards,” Bernard said. “That’s the goal. Many before me have done it. Now it’s my turn. It’s these guys’ turn. We all got a chance at it.”

Joining such company is one reason Utah has grown into an appealing destination for elite running backs in recent seasons. Thomas, a sophomore, said he picked the Utes specifically because the style of play under Whittingham allows good backs to become better.

"They run the ball. They’re physical. Got the big dogs up front," Thomas said. "I feel like I fit perfectly in the system."