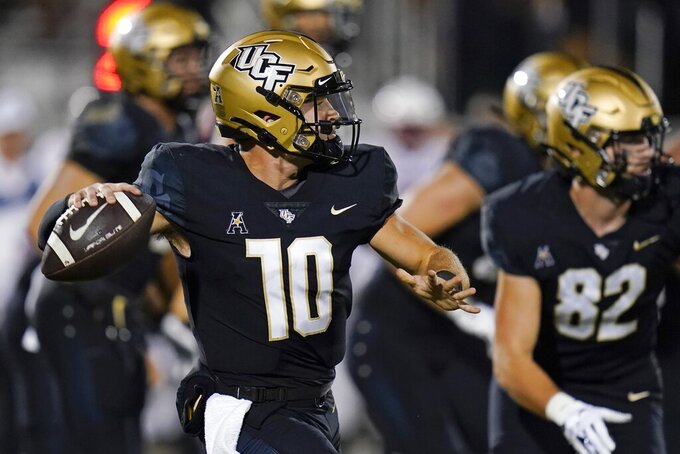 Central Florida quarterback John Rhys Plumlee (10) looks for a receiver against Louisville during the first half of an NCAA college football game, Friday, Sept. 9, 2022, in Orlando, Fla. (AP Photo/John Raoux)

Line: UCF by 20½, according to FanDuel Sportsbook.

UCF looks to improve to 3-1 in its final test before entering American Athletic Conference play. The Knights rebounded from a 20-14 loss to Louisville with a 40-14 rout of Florida Atlantic on the road. Georgia Tech faced ranked opponents in two of its first three games, losing to Clemson and Ole Miss by a combined score of 83-10.

QB Jeff Sims and the Yellow Jackets' struggling offense against one of the nation’s stingiest pass defenses. UCF has limited opponents to 121.7 yards per game passing, which ranks seventh nationally among Football Bowl Subdivision teams.

Georgia Tech: Sims has completed 57.6% of his passes while throwing for 425 yards and one touchdown through three games. Dontae Smith is the team’s leading rusher with 154 yards and three TDs.

UCF: QB John Rhys Plumlee, a transfer from Ole Miss, has completed 60.4% of his passes for 778 yards and five TDs. He’s also the Knights’ leading rusher with 304 yards and three TDs. RB Isaiah Bowser has five TDs rushing, and as a team, UCF is averaging 273 yards per game rushing — fourth in the nation, first in the AAC.

Plumlee was named AAC offensive player of the week after accounting for 460 yards total offense and three TDs in UCF’s blowout at FAU. He threw for 339 yards and two scores, while running for 121 yards and one TD. ... Georgia Tech is one of five FBS teams that have faced at least two ranked opponents in the first three games. The Yellow Jackets play another next week in Atlantic Coast Conference rival Pittsburgh. ... UCF amassed 653 yards of total offense against FAU. The Knights are the only FBS team that’s gained over 600 yards twice this season. ... Georgia Tech is seeking its first non-conference road win since beating Georgia in 2016.