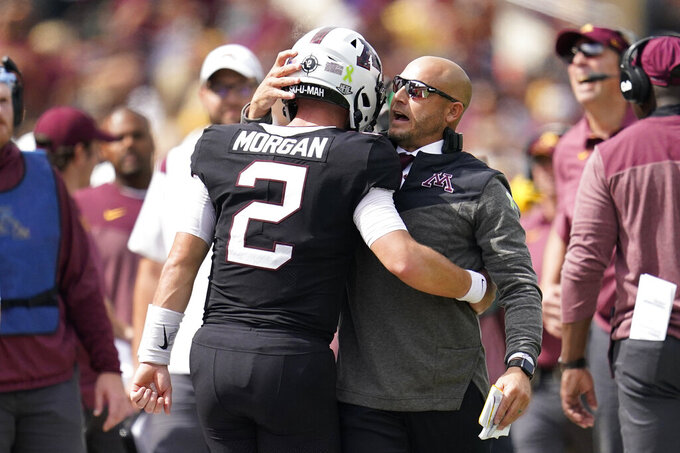 Line: Minnesota by 27½, according to FanDuel Sportsbook.

Colorado: The Buffaloes are 0-2 for the first time since 2012, when they finished 1-11. Picked to finish last in the preseason Pac-12 poll, the Buffaloes under third-year coach Karl Dorrell are simply trying to restore some optimism and pride to the program. Their 41-10 loss to Air Force last week didn't help.

Minnesota: The only undefeated team left in the Big Ten's weaker West Division, the Gophers will play a third consecutive nonconference home game as a heavy favorite before hitting the road for what could be their toughest opponent of the season: 11th-ranked Michigan State. Maintaining the rhythm established with the passing attack in a 62-10 win over Western Illinois last week will be critical for the Gophers entering conference play. QB Tanner Morgan was 14 for 18 for 287 yards and one touchdown in 2½ quarters, his highest yardage total since Nov. 30, 2019.

Colorado DLs and LBs vs. Minnesota OL. The Gophers have routinely been among the most productive rushing teams in the country, and — albeit against low-quality competition — they rank second in the FBS with an average of 302 yards per game. Guess who's last in rushing defense among the 131 teams at the nation's highest level? The Buffaloes. They've allowed 710 yards on the ground on just 100 attempts over two games.

Colorado: J.T. Shrout took over at QB against Air Force after Brendon Lewis started the opener. Shrout finished 5 of 21 for 51 yards and one interception. He also slid too early on a fourth-and-short play in the fourth quarter when he could have had the first down. Dorrell said this week neither player has separated himself from the other in the competition for the job. Lewis was the full-time starter last year.

Minnesota: RB Mohamed Ibrahim has a school-record streak of 11 straight games with 100-plus rushing yards. He has 37 career rushing TDs, three short of Gophers record-holder Darrell Thompson. Ibrahim has played in only 31 games, despite being in his sixth year in the program. Thompson played in 45 games from 1986-89. Ibrahim is sixth on school's all-time rushing yards list with 3,265. Thompson is first with 4,654.

Minnesota beat Colorado 30-0 on the road in Boulder last season, allowing just 63 total yards on 45 plays. That was the first win in the short series by the Gophers. The Buffaloes won in 1972, 1991 and 1992 when they were a member of the old Big Eight Conference. ... The Gophers have won four straight games against Pac-12 opponents, last losing at USC on Sept. 3, 2011. They're 29-29-2 all-time. ... The Buffaloes have lost six straight road games. Their last such win was at Arizona on Dec. 5, 2020. ... Colorado offensive coordinator Mike Sanford Jr. had that job at Minnesota the last two years. Tight ends coach Clay Patterson followed Sanford from Minnesota to Colorado.