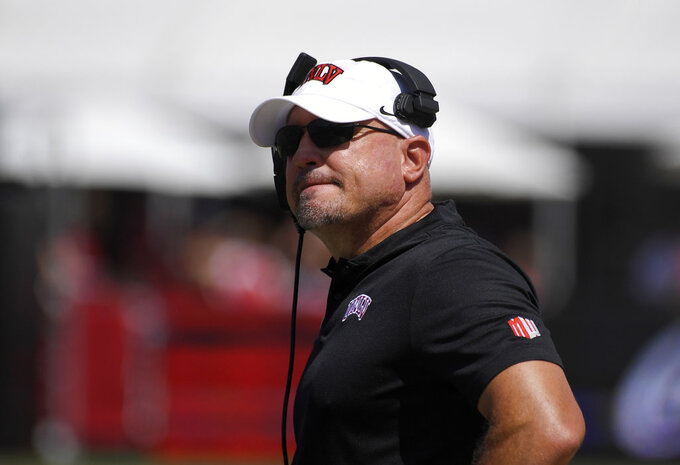 FILE - In this Sept. 1, 2018, file photo, UNLV head coach Tony Sanchez watches the first half of an NCAA college football game against Southern California in Los Angeles. Sanchez is in his fourth season in charge of an uptick Rebels program that has improved by one victory in each of his first three seasons. (AP Photo/Mark J. Terrill, File)

Yet while he's taken their philosophies to heart during his coaching career, this summer Sanchez took a different approach, looking to employ more detail, more focus, and tactical strategies while preparing for his fourth season in charge of a program that has improved by one victory in each of his first three seasons.

For the Rebels (2-1), those missions are games. So far, UNLV has defeated opponents by at least four touchdowns in back-to-back games for the first time since becoming a Division I program in 1978, and for the first time overall since 1975, after blowout wins against UTEP and Prairie View A&M. Their loss came to Southern California in Los Angeles. The Rebels end their nonconference slate this week against a tough Arkansas State team.

Sanchez, just the fifth high school coach to move directly to the head job at an FBS-level school, is 14-25 in his college coaching career.

UNLV won three games in his first year, then four in his second, then five. If the pattern continues, the Rebels could conceivably land in a bowl game after this season.

"Once the season starts, we never speak of a bowl game, we never speak of the Mountain West, we focus on the task at hand," Sanchez said. "It's by far the best team we've had since we've been here when it comes to depth and everything. They're doing a real good job of playing hard and playing together. I think this can be a bowl team, I think this is a team that can compete for the West (Division), and if you can compete for the West, then you have a chance in the Mountain West championship. For us right now, it's just learning to win two games in a row."

Sanchez is adamant his players ignore postseason talk, or hype about having one of the nation's best ground attacks — they rank third behind Georgia Tech and Navy with 346.7 yards per game — saying there is far too much work to be done to start feeling good about the program's best three-game start since he arrived.

"As soon as you start feeling good about yourself, bad things happen," Sanchez said. "We're at a point now where we're bigger, we're longer, we're faster, we're stronger, we're more talented. Can we win in between the ears? If we do that we're gonna be fine."

Another thing that's different about this team, Sanchez said, is that the program is finally drama free. No off-field distractions, no academic issues, no failed drug tests, and a much better culture in the locker room.

"Whether you're talking about academics or on the field, it's a totally different atmosphere from when I got here four years ago," said senior running back Lexington Thomas. "Back then you could tell some people did not buy into everything that needed to be done. Now everyone is all in, you can see it in their faces, and we are one family working toward the same goals."